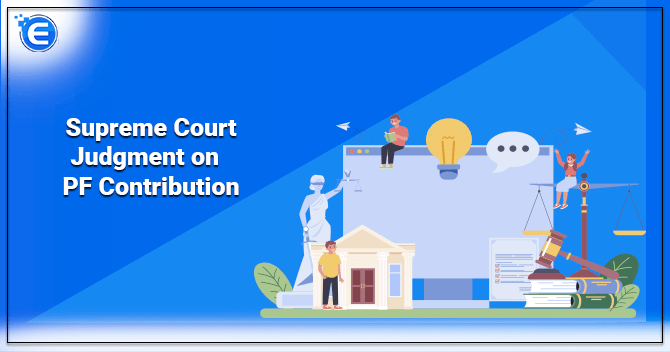 The Supreme Court of India, held this judgment on 28th February, 2019.

The Supreme Court said that

“Whatever is payable by all concerns or earned by all permanent employees had to be included in basic wage for the purpose of deduction under section 6 of the act.”

Now, the special allowances will be taken into account for PF contribution under basic salary. Now, let’s get into the matter!

On 28th February 2019, the two-judge bench of Justices Arun Mishra and Navin Sinha passed a verdict that “under basic wages, special allowances will be considered such as conveyance, canteen, education, medical, special holidays etc and such other incentives”.

At present, as per the Employees’ Provident Funds (Amendment) Scheme, 2014, employer and the employee both to make contribution at the rate of 12 percent of the ‘monthly pay’ which includes basic wages, dearness allowance, value of food concession and retaining allowance.

As per the Supreme Court judgment, segregation of ‘special allowance’ from basic wages cannot be done for the purpose of deduction of Provident Fund. This judgment will have great impact on the companies as well as on the salary class people.

Before vs. Now – What has changed?

As we know that as per Section 2(b) both employer & employee has to contribute 12% of the wages in Employee Provident Fund (EPF). While calculating the amount for PF contribution the term “basic wages” includes compensation earned by an employee as per the terms of the employment contract however following below mentioned will not be considered in basic wages:

But now as per the latest judgment passed by the Supreme Court, for the purpose of calculation of PF, basic wages will include Dearness Allowance. The judgment order also focused on the non submission of proof by the establishments of the special allowances given to the employees as incentives.

The Supreme Court Held that

“In order that the amount goes beyond the basic wages, it has to be shown that the workman concerned had become eligible to get this extra amount beyond the normal work he was otherwise required to put in.“

When the court questioned that no allowances have been paid to employees, there no supporting material.

How this Judgment on PF Contribution will affect you?

The Supreme Court judgment on PF contribution is reflecting deduction for PF contribution which is a very good decision. But there is always a difference of opinion on every order. This decision might not go well with the current lifestyle of people as people will get less salary in hand. it will not impact everybody.

“The order will be applicable to those with a basic salary and allowances up to Rs 15,000 as PF contribution. Beyond that, PF is not mandatory”

A combined judgment has been passed by the apex court in case of five civil lawsuits. The ruled in favor of the Employee Provident Fund Authority[1]. This order has been passed considering the allowances which were forming a question that it should a part of the basic wage. However, this judgment is still not giving clearance on compulsory provident fund contribution by employees earning a basic salary up to Rs 15,000 at the time of joining a company. Therefore the contribution shall remain the same for the remaining tenure even if your basic wage increases after some time. Even if your salary is more than Rs. 15,000/- at the time of joining the establishment, you can opt not to make to provident fund or contribution can be limit up to Rs 15,000/-.

You can read the detailed judgment from here: SupremeCourt Judgment on PF Contribution

Universal Account Number or UAN has become one of the important things as the whole process of...

Employee Provident Fund is one of the most popular and promising tools for investment as well a...

Employee Provident Fund (EPF) is a benefit for the employee during the retirement. It is a soci...