Some Common Penalties under Income-Tax Act, 1961 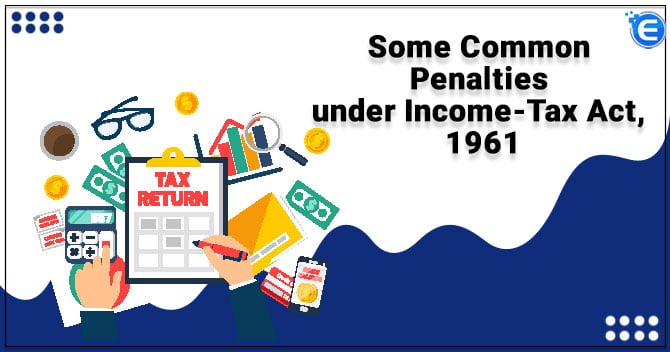 An assessee who commits an offence under Income Tax Act 1961 shall be subject to penalty. The penalty shall be an additional amount levied and is different from the tax payable. The penalty is imposed based upon the law at the time offence is committed and not as it stands in the FY for which assessment is being made. In this article, we shall discuss certain common penalties under Income-Tax Act.

Below we have discussed certain offences and their penalties.

Default in making payment of Tax

According to section 234E, in case a person fails to file TDS return on or before the due date, then such a person will be liable to pay an amount of 200 rupees for each day during which failure continues.

Default in furnishing return of income

In case an assessee who must furnish return of income fails to do so within prescribed due date under section 139 (1), then he will have to pay-

However, in case the total income of the person doesn’t exceed 5 lakh rupees, then the fee payable will be 1000 rupees.

Under-reporting and misreporting of income

Failure to keep, maintain/retain books of account, documents as required under Section 44AA

Every person entering into international transaction or specified domestic transaction should keep and maintain such information and documents as prescribed in this regard under Rule 10D. The taxpayer should furnish such accounts in 30 days if demanded by the Income tax department.

In case of default, penalty of, sum equal to 2% of value of each international transaction or specified domestic transaction entered into by a taxpayer, will be levied.

The assessing officer can make addition to the assessee’s income under Sections 68, 69, 69A, 69B, 69C or 69D in case the assessee fails to explain the nature and source of the income.

Penalty at the rate of 10percent of the tax payable under Section 115BBE may be levied if any addition is made under the aforementioned sections.

As per Section 44AB, when the accounts of the taxpayer is to be audited, and if a taxpayer fails to get accounts audited, then he can be held liable for penalties under Income-Tax Act (Section 271B). Penalty shall be levied of one-half % of total sales, turnover or gross receipts etc. or 150000 rupees, whichever is less.

Failure to furnish a report from accountant required under Section 92E

If a taxpayer fails to furnish a report from an accountant to be provided by persons entering into the international transaction or specified domestic transaction under Section 92E, a penalty of 1 lakh rupees shall be levied.

Penalties under Income-Tax Act- Section 272A (2)

Penalty under Section 272A (2) shall be levied in case of the following defaults:

These were some of the common penalties under Income-Tax Act 1961. Every taxpayer should be aware of the offences recognised by the IT Act and must follow all compliances in order to be safe from penalties. The principal commissioner or the commissioner of the Income Tax has the authority to waive or reduce any penalty under the said Act.

Read our article:What is Wealth Tax in India & why was it abolished?