What is Wealth Tax in India & why was it abolished? 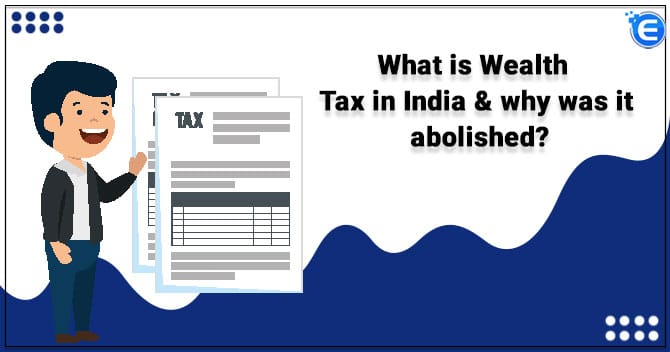 India’s tax system involves different forms of taxes, and one of them is the Wealth tax. However, this tax has been abolished. This form of taxation is imposed on the richer section of society. In this article, we shall understand the Components and applicability to pay wealth tax in India.

As stated at the beginning, wealth tax is imposed on richer section, and the objective behind this is to bring parity amongst taxpayers. However, this tax was abolished in 2015 due to the simple reason that the cost incurred for recovering taxes was more than the benefit. Therefore as an alternative to this tax, the finance minister hiked the surcharge from 2% to 12% for the super-rich section of the society. The super rich section includes individuals with an income of more than 1 crore rupees and companies with an income of more than 10 crore rupees.

It may be noted that this form of tax applies to the following:

The deciding factor for wealth tax applicability is the residential status. The rule is that the resident Indians are subject to wealth tax on their global assets. However, in case of NRI, they fall under the purview of wealth tax for assets in India.

Calculation of Wealth Tax in India

Wealth tax was calculated on market value of assets owned regardless of whether they yielded returns or not. All individuals and HUF with a net wealth of more than 30 lakh rupees were required to pay this tax.

This tax was based on the assets valuation as on March 31 and, therefore, would be applicable on assets acquired at the end of a financial year. However, those assets that were sold during the year don’t fall under the ambit of wealth tax[1].

Wealth tax was calculated at 1 percent on net wealth more than 30 lakh rupees.

Why was Wealth Tax abolished in India?

The following are the primary reasons for its abolishment:

Its curtains for wealth tax in India as it was abolished in India by the central government as it had high collection costs but low yield. Wealth tax has been replaced by the levy of an additional surcharge.

Read our article: Corporate Tax in India: Everything you need to know

The method of paying income tax has been simplified over the years. However, there has been con...

Key Implications of the Taxation Bi...