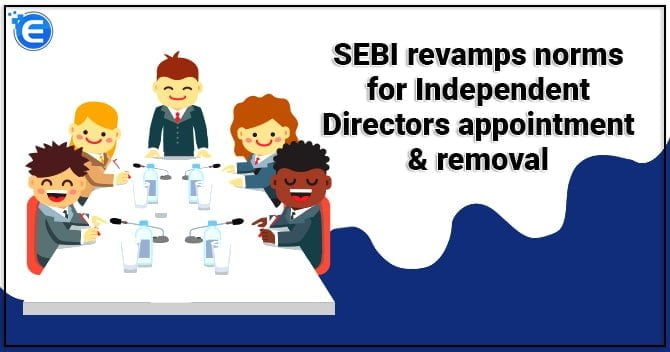 With a view to empower independent directors of listed companies, the Securities Exchange Board of India overhauled rules related to their appointment, removal and remuneration aimed to provide more say to the shareholders. The announcement was made after a board meeting held on 29th June 2021. In this article we shall discuss the overhauled norms for Independent Directors.

Who is an Independent Director?

An independent director refers to a non-executive director of a company who assists the company in improving the corporate credibility and governance standards.

Such director does not have any kind of relationship with the company that may affect the independence of his or her judgment. The term “Independent Director” is defined in the Companies Act, along with several new requirements pertaining to their appointment, duties, role, & responsibilities.

The regulations for the Independent Directors shall include the following:

Norms for Independent Directors: Audit Committee and Insurance of directors and officers

Other decisions taken by SEBI

SEBI also pronounced a host of other decisions, such as permitting resident Indian fund managers to be constituents of foreign portfolio investors. It reduced the minimum investment level in listed infrastructure investment trusts and Real Estate Investment Trusts to 10,000 rupees-15,000 rupees from 50,000 rupees.

SEBI has also amended the ‘skin in the game’ norm for the Asset Management Companies (AMC) based on risk of the schemes, rather than mandatory 1 per cent of the amount raised. Further, with a view to improve information flow on insider trading cases, the market regulator has increased the reward to informants to 10 crore rupees from 1 crore rupees

The board of SEBI permitted payment and small finance banks to register as a banker to an issue. It is expected to help broaden the reach of the capital markets. The SEBI also introduced the concept of ‘accredited investors’, these are a class of investors who are well-informed and well-advised about investment products. Such investors will enjoy various benefits as those enjoyed by the institutional investors.

In order to deepen the debt market, SEBI has introduced the Non-Convertible Securities Regulations. Experts believe that it would encourage public issuances of debt securities and lower the burden on the banking system. SEBI further streamlined rules for Indian fund managers to act as foreign portfolio investors.

The changes have been proposed to be in place from 1st January 2022. Moreover, the SEBI Board has also proposed some radical norms for independent directors like permitting independent directors to receive profit-linked commissions and Employee Stock Ownership Plan within the prescribed limit as provided under the Companies Act 2013.

Explaining Benefits of Listing a Co...

Companies listed on the stock exchange have got a lot of benefits. You may have heard about com...

What is meant by “Voluntary D...

Share delisting means the removal of a listed stock from a stock exchange therefore, it won't b...

A New Fund Offer (NFO) is the process through which an asset management companies creates a ne...