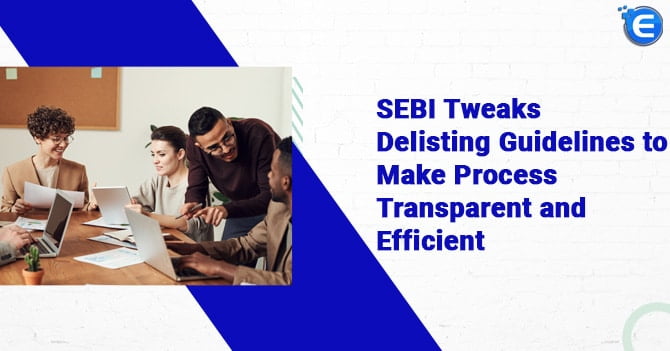 With a view to reinforcing transparency and efficiency of the delisting course, the Securities and Exchange Board of India stated that the independent directors would have to provide reasoned recommendation on such proposal, and the promoters must disclose their intention to delist the firm through an IPO. In order to give effect to this, SEBI has amended the delisting guidelines, as per a notification dated June 10.

What do you mean by Delisting?

Delisting refers to the permanent removal of equity shares of the company from the trading platform of a recognized stock exchange, by voluntary or by compulsory method.

Overview of the Tweaked Delisting Guidelines

SEBI further mentioned that the committee of the independent directors would be required to provide their reasoned recommendation on the delisting proposal.

Further, the promoter or the acquirer entity would be permitted to specify an indicative price for delisting. It should not be less than the floor price. It will help the investors to gauge the inclination of the promoters and their willingness to pay that price.

Further, the promoter would be bound to accept the price discovered through a reverse book building in case the same is equivalent to the floor price or to the indicative price. Moreover, the role of the merchant banker involved in the delisting process has been detailed.

As per the rules, the acquirer must acquire 90% of the total share capital of the company for successful delisting.

In case of companies having shareholders, vanishing companies, struck off firms, those whose shares has been transferred to investor education & protection fund (IEPF[1]) account- the minimum acquisition threshold under Reverse Book Building should be calculated after deduction of the shareholding held by such shareholders.

The result of Reverse Book Building in terms of its success or failure has to be announced in 2 years of the tendering period closure. With respect to the timeline, SEBI said that the company should get the approval of its board of directors in respect of proposal of the acquirer to delist the equity shares in 21 days from the initial public announcement date.

Currently, the timeline for getting boards’ approval is not specified. The regulator stated that the period of 15 working days from the special resolution passing should be stipulated for the company to file an application for in-principle approval by the exchanges. SEBI stated that the recognized stock exchange would not withhold such an application unfairly.

The public announcement for providing a counteroffer or accepting or rejecting the discovered price shall be made in 2 working days of the tendering period closure.

Further, the cooling-off period for relisting post-delisting is reduced to 3 years. Presently such period is 5 years.

SEBI has Revised Framework for Inno...

The capital market has been an early adopter of technology. SEBI believes that encouraging the...

Given the magnitude and extent of its spread, the pandemic “Covid-19” is not only causing h...