SC observes obliteration in the difference between tax and fee 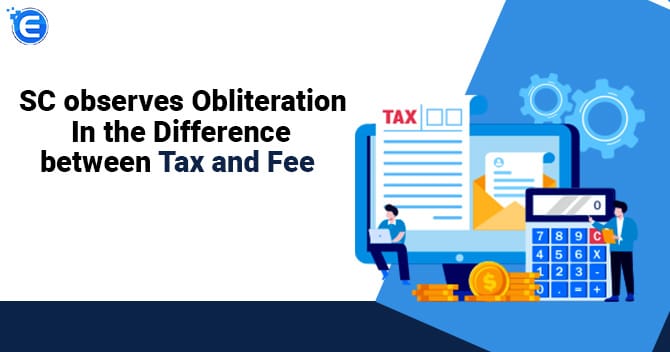 The Supreme Court of India in the case of Jalkal Vibhag Nagar Nigam and ors vs. Pradeshiya Industrial and Investment Corporation and Anr. observed that the difference between tax and fee has been substantially removed. The bench headed by Hon’ble Justice DY Chandrachud observed that the practical and constitutional difference between fee and tax has been weathered down while rejecting the challenge against constitutional validity of Section 52 (a), 55(b) (i) and 56 (b) of the UP water supply and Sewerage Act[1].

Background of the Case: Distinguishing Tax and Fee

In this case, the petitioners challenged that the levy under Section 52 (1) (a) of the UP water supply and Sewerage Act described as water tax is a fee and not a tax. Although the legislature used the nomenclature of water tax, the levy in effect is an exaction on water/water supply, therefore it is impermissible in view of the Entry 49 List II to the Schedule VII of the Indian Constitution.

Addressing this argument of the petitioner, the bench observed that the difference between fee and tax has effaced in the growth of our constitutional jurisprudence. Once, it was possible for courts to assume that there is a difference in the term tax and fee wherein tax was considered in the nature of a compulsory exaction while fee is for a service rendered. The bench observed that this difference based on the element of a quid pro quo in case of a fee and its absence in tax has steadily been obliterated to a point where it is devoid of any practical or a constitutional significance.

The court further added that the difference between the two that while tax is a compulsory exaction and fees constitutes a voluntary payment for services rendered, does not hold good.

The court held that on one side the payment of charge or a fee may not be voluntary, and the charge could be imposed simply on a class to whom the service is rendered and on the other side, the service might not be rendered directly to a person distinguished from general service provided to the members of a group or a class of which that person is a part.

Moreover, as the law has moved on, it has come to be recognised that there is no such need for exact co-relation between the expenditure incurred in providing service and the amount realized by the state. The difference that while tax is a compulsory exaction, fee constitutes a voluntary payments for the services rendered doesn’t hold good. The bench stated that as in case of tax and also in case of a fee, the exaction may not be voluntary in nature. Likewise, the element of the service might not be entirely absent in a given case in the context of a provision imposing tax.

The bench also referred to previous judgments- Southern Pharmaceuticals and Chemicals, Trichur vs. State of Kerala, Municipal Corporation of Delhi vs. Mohd. Yasin & Sreenivasa General Traders & Others vs. State of Andhra Pradesh. By referring to the judgments made in these cases, the bench observed that in view of the consistent line of authority, it seems that that the practical as well as the constitutional difference between the two has declined. In case of a tax, a fee may also involve compulsory exaction. Fee can have the element of compulsion and its proceeds can become a part of the consolidated fund. Likewise, the element of quid pro quo is not compulsorily missing in case of every tax.

In this case, the bench observed that levy under Section 52 (1) is a tax and not fee and it is a tax on lands and buildings within the meaning of Entry 49 List II.

Key Differences between Tax and Fees

Some of the notable differences between the two are as follows:

The bench headed by Justice DY Chandrachud observed that the practical and constitutional difference between tax and fee has been weathered down. In case of a tax, a fee may also involve compulsory exaction. Fee can have the element of compulsion and its proceeds can become a part of the consolidated fund. Likewise, the element of quid pro quo is not compulsorily missing in case of every tax.

The purpose of the GST regime is to benefit both the buyer and the seller and make compliance e...

Provisions applicable to TDS on int...

The Income Tax Act provides for a system of tax deduction at the time of generation of income b...