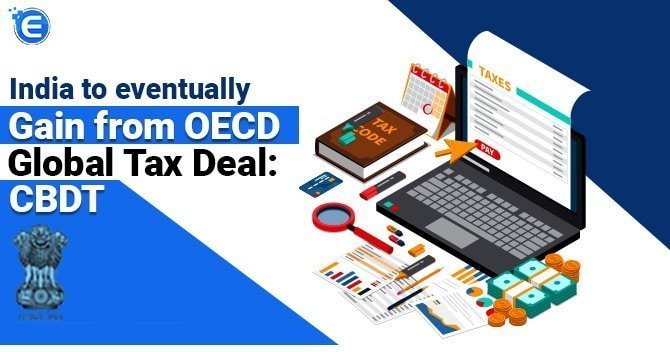 The Central Board of Direct Taxes (CBDT) expects that India might stand to gain in terms of tax revenues once the global tax deal gets implemented in the coming few years, according to its Chairman, J.B. Mohapatra. CBDT is of the view that India will not suffer as a result of joining the inclusive framework agreement.

What is the global tax deal about?

A landmark global agreement has been reached between nations to ensure that large corporations pay a minimum tax rate of 15% and to make it more difficult for them to avoid paying taxes.

According to the Organization for Economic Cooperation and Development (OECD), which has been driving the negotiations for quite some time, the agreement will cover 90 percent of the global economy. The agreement was supported by 136 of the 140 countries concerned.

The agreement seeks to put an end to a four-decade-long “race to the bottom” by governments seeking to attract investment and jobs by taxing multinational corporations lightly and allowing them to roam around for cheap tax rates.

The proposed solution is made up of two parts: Pillar One, which is about reallocating an additional share of earnings to market jurisdictions, and Pillar Two, which is about imposing a minimum tax. Big multinationals will be required to pay a minimum tax rate of 15% under the global tax deal.

According to the most recent OECD framework agreement, Pillar One will apply to MNEs with a profit margin of more than 10% and a global turnover of more than 20 billion euros. The profit to be reallocated to markets shall be computed as 25% of profit before tax in excess of 10% of revenue.

The agreement attempts to prohibit big businesses from booking profits in low-tax nations such as Ireland regardless of where their clients are located, an issue that has become increasingly pressing with the emergence of “Big Tech” giants that can readily transact across borders.

The global tax deal aims to provide a clear route to a more equitable tax system in which significant global participants pay their fair share wherever they conduct business.

According to the OECD, the minimum rate would result in governments collecting about $150 billion in additional taxes each year, while taxing rights on profits exceeding $125 billion would be transferred to countries where large multinational corporations derive their earnings.

How will the global tax deal impact India?

India will continue to have an equalization levy, commonly known as the ‘Google tax’ until the OECD framework is adopted. The ‘Google tax’ brought in Rs 2,200 crore of revenue in FY 2021 and is likely to bring in more than Rs 3,000 crore in FY 2022.

While claiming that tax is a “sovereign function,” India is likely to try to achieve a balance between its interests. If a global minimum tax agreement is reached, India may be forced to discontinue its digital tax or equalization levy. According to the OECD, the Multilateral Agreement (MLC) compels all parties to eliminate all taxes on digital services and other relevant equivalent measures in respect to all enterprises, as well as to commit them not to undertake such measures in the future.

The government enacted the ‘Equalisation Levy’ in 2016 to address the “challenges faced by organizations that do business through digital means and carry out activities in the country remotely.” Furthermore, the Income Tax Act has been changed to include the idea of “significant economic presence (SEP)” in order to establish a “business relationship” with non-Indian residents.

Aside from the equalization levy, India will have to repeal the special economic presence (SEP) scheme, which was implemented this year to target multinational corporations (MNEs) with a huge consumer base but avoiding the tax net.

Along with the CBDT, a few industry analysts feel that India will benefit in the long run, stating that if the agreement is successfully implemented over time, more corporations will join the bandwagon, and tax revenue for nations like India will increase significantly.

India would prefer the 20 billion euros benchmark to be reduced to encompass more businesses rather than the top 100 MNEs, and the residual profit allocation to market jurisdictions to be greater than 25% when these are reviewed in a period of seven years.

Under the present Pillar One agreement, all the in-scope MNEs that provide services or goods to clients in India will be covered. “India[1] would not be worse off as a result of India’s participation in the inclusive framework agreement.” J.B. Mohapatra, the Chairman of CBDT, said that they have calculated that India will benefit in the long run.

According to the tax consultancy firm EY India, while India is a large market for digital enterprises, it is unclear whether India will benefit much from the introduction of Pillar One laws. It stated that the restrictions apply only to very large MNE groups and that the scope is limited in comparison to the domestic “equalization levy,” which contributes significantly to Indian tax revenues. “Large Indian-based MNEs will also be required to comply with Pillar One laws, and India will be required to share its taxing rights with other nations,” it added.

J.B. Mohapatra, chairman of the Central Board of Direct Taxes (CBDT), stated that the adoption of the OECD Inclusive Framework on Base Erosion and Profit Shifting will benefit India in terms of tax revenues over the next few years. The initiative, which will go into effect in 2023, aims to address the tax difficulties that have arisen as a result of the global economy’s digitalization. However, tax experts are skeptical of the new regime’s potential benefits for India, at least in the short term.

All about Income Tax Intimation Not...

Once an individual has verified their tax return, the income tax department starts processing I...

The year 2020 has been beneficial for taxpayers as well as companies. The finance and income ta...

Cash withdrawal of more than 1 Cror...

The Central government to reduce cash transactions and move one step forward towards the cash-l...