Agreement Between Nations to Pay a Global Minimum Tax of 15% 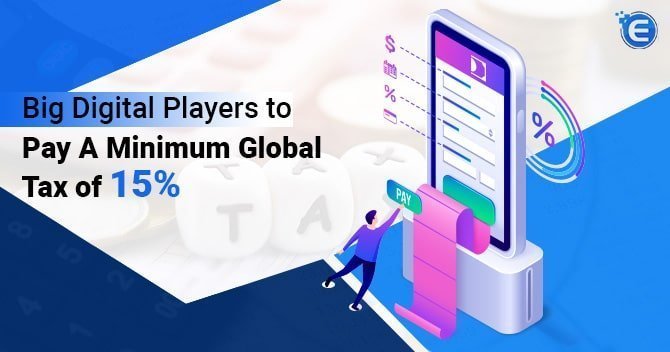 A majority of the governments across the world have signed a landmark agreement that may compel multinational businesses to pay their fair share of taxes in the areas where they operate and derive profit. The step is taken on account of a growing belief that large multinational firms are evading taxes by routing their earnings via low-tax nations. As a result, a new framework is developed as part of international tax reform by levying a global minimum tax rate on multinational firms.

The Organisation for Economic Cooperation and Development (OECD[1]) has recently announced that representatives from 136 countries, including India, have finalized a global minimum tax agreement that will ensure that large digital players such as Google, Facebook, Netflix, and Microsoft pay a minimum tax rate of 15% wherever they operate. The tax agreement will take effect in 2023.

Out of 140 countries, 136 countries consented to this two-pillar solution to address the tax implications of the digitalization of the economy. The agreement was not signed by four countries: Sri Lanka, Kenya, Nigeria, and Pakistan.

The OECD has also requested the immediate repeal of unilateral digital services tax measures such as the equalization levy, as well as a commitment not to enact similar measures in the future. Furthermore, from October 8, 2021, until the earlier of December 31, 2023, no newly enacted digital taxes or other relevant similar measures will be imposed on any company.

In 2016, India imposed a 6% equalization levy on digital advertising services. It expanded the scope to impose a 2% tax on non-resident e-commerce players in April 2020. This fiscal year, India has collected over 1,600 crores in the levy, nearly doubling the amount collected the previous year.

OCED thought on it

The agreement on global minimum tax, according to the OECD, does not intend to abolish tax competition altogether, but rather applies multilaterally agreed restrictions on it, resulting in countries receiving roughly USD 150 billion in new revenues each year. This agreement intends to make the international tax arrangements more equitable, fairer, and efficient.

This is a significant achievement for effective and balanced multilateralism, according to the OECD. It’s a major agreement that ensures our international tax system is fit for its purpose in a world that’s becoming more digitalized and globalized. It says that we must now work fast and deliberately to see the successful implementation of this fundamental reform.

What decisions are taken?

The OCED has proposed this solution to consist of two pillars. The proposal’s first pillar recommends taxing companies with revenues of 20 billion euros and profit margins of more than 10%. These primarily cover the top 100 businesses. After seven years, the threshold will be reviewed and reduced to ten billion euros. This is significantly higher than the 1-billion-euro revenue threshold pushed by developing countries, including India, to cover 5,000 global firms.

All earnings they make above the 10% threshold are reallocated and taxed in the countries where they were made.

With respect to the largest MNEs, including digital firms, Pillar One strives to secure a more equitable distribution of earnings and taxing rights among countries. This would mean that some tax rights against multinational companies would carry over from their home countries to the markets in which they do business and make a profit, regardless of whether the companies are physically present there.

Pillar 2 seeks to assure that multinational firms pay a minimum effective tax rate on all of their profits every year. Companies with revenues exceeding EUR 750 million will be subjected to the new minimum tax rate, which is hopeful to generate an additional USD 150 billion in global tax revenues each year. The stabilization of the international tax system, as well as increased tax certainty for taxpayers and tax administrations, will provide additional benefits.

Pillar Two aims to put a ceiling on competition in corporate income tax by establishing a global minimum corporate tax rate that countries can use to safeguard their tax bases. It was originally scheduled to take effect in 2023 but has now been postponed until 2024.

According to the OECD, the two-pillar solution includes a number of features that address the concerns of low-capacity countries. The OECD will ensure that the rules are implemented effectively and efficiently, as well as provide comprehensive capacity-building assistance to countries that require it.

Previously, countries would quite often compete with one another to offer multinationals a favourable deal. When those companies could come in, set up a factory, and create jobs, it made sense. In a way, they were repaying the favour. However, in the new digital era, companies have mastered the art of simply shifting profits from where they do business to where they will pay the lowest taxes.

The new proposal aims to limit MNEs’ ability to engage in profit shifting by requiring them to pay at least some of their taxes where they do business. Big Tech companies, which have largely chosen low-tax jurisdictions to base their operations, are likely to be the most affected.

The two-pillar solution will ensure that “the world will once again be global, at least in terms of taxation principles rather than abiding by territorial laws.”

Aside from low-tax jurisdictions, the proposals are aimed at addressing the low effective tax rates paid by some of the world’s largest corporations, including Big Tech giants like Apple, Alphabet, and Facebook, as well as Nike and Starbucks. Typically, these companies use complex webs of subsidiaries to funnel profits out of major markets and into low-tax jurisdictions like Ireland, the British Virgin Islands, the Bahamas, or Panama.

The new system is intended to reduce profit-shifting opportunities by requiring large corporations to pay at least some of their taxes where they do business rather than where they choose to have their headquarters.

Is it going to pose any problems?

Aside from the difficulties of getting all major nations on the same page, the proposal has other flaws, such as infringing on the sovereign’s right to decide on a country’s tax policy. A global minimum tax rate would effectively eliminate a tool that countries can use to impose policies that benefit them. It will also be difficult to pass and bring in these laws by the end of the year so that they can take effect in 2023.

How is India going to deal?

India, which had reservations about the agreement, eventually supported it in Paris.

While asserting that taxation is ultimately a “sovereign function,” India is likely to try to strike a balance between its interests. If the global minimum tax agreement is reached, India may be forced to abandon its digital tax or equalization levy. According to the OECD, the Multilateral Agreement (MLC) requires all participants to remove all taxes on digital services and other relevant similar measures in relation to all companies and to obligate them not to initiate such measures in the future.

The government has the ‘Equalisation Levy,’ which was introduced in 2016 to address “the challenges posed by entities that conduct business through digital means and carry out activities in the country remotely.” In addition, the Income Tax Act was amended to include the concept of “significant economic presence” in order to establish a “business relationship” with non-Indian residents.

Also, there are concerns about the deal’s impact on the investment activity of India. “India, China, Estonia, and Poland have stated that the global minimum tax could potentially impair their capacity to attract investment particularly with respect to items like research and development credits and special economic zones that offer tax incentives to investors,” according to the New York Times.

A historic agreement has been accepted by a majority of the countries across the world to assure that large firms pay a fairer share of taxes. As a result of this agreement, 136 countries agreed to implement a corporation tax rate of at least 15% and to a more equal or fairer system of taxing earnings where they are derived. It stems from the fears that multinational firms across the world are diverting their earnings to low-tax jurisdictions.

Scope and Implications of Section 2...

Every payment covered under the TDS provisions should be made after a deduction of tax. Every p...

The Finance Act 2021 inserted a new section to provide relief to the senior citizens who is 75...