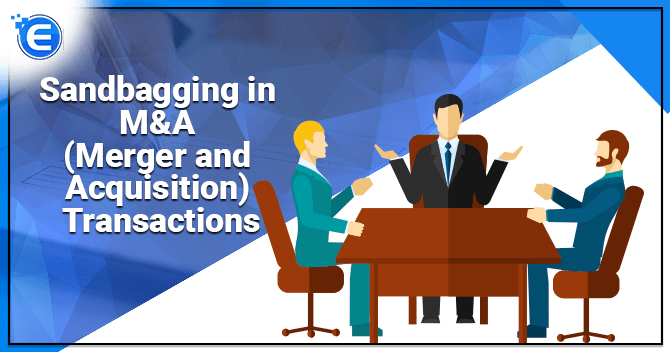 The concept of Sandbagging means a situation where a party has a strength or an advantage or is in a powerful position, which is concealed in order to take advantage of the other party later on.  The concept of sandbagging in M&A transactions is not new. It can become a matter of debate between buyer and seller about honesty, integrity, and good faith. Let’s discuss more on Sandbagging in M&A Transactions.

What are Mergers and Acquisitions?

What do you mean by Sandbagging in M&A Transactions?

In the context of Sandbagging in M&A Transactions, it means when a buyer learns that the seller has breached the term of agreement before closing but doesn’t raise the issue until after closing when it asks for indemnification from the seller.

The agreement in a private Merger and Acquisition transaction includes a variety of representations, warranties, etc. It is made by the seller to the buyer in regard to the asset being bought and sold. Sandbagging happens when the buyer comes to know that one or more of the representations is inaccurate but doesn’t communicate to the seller and completes the transaction despite knowing that it’s inaccurate and then seeks indemnification from the seller.

Buyers seeking the inclusion of pro sandbagging provisions make a number of arguments:

The merits of the above arguments can differ as per the dynamics of the deal and the circumstances of both parties.

When the buyer agrees with the inclusion of anti sandbagging provisions in the agreement, the buyer can reduce the risk by narrowing the scope of knowledge to its actual knowledge, thereby still seeking indemnification in situations where it has constructive knowledge of the breach.

The key factor could be how the jurisdiction treats prior knowledge of a breach and whether reliance is required for a contract breach.

Read our article:Merger and Acquisition Process in India

Analysis of Mergers and Acquisition...

A merger can be understood as a combination of two or more entities.  This term is synonym...