What are the Rights and Duties of Promoters, Allottees and Real Estate Agents under RERA Act? 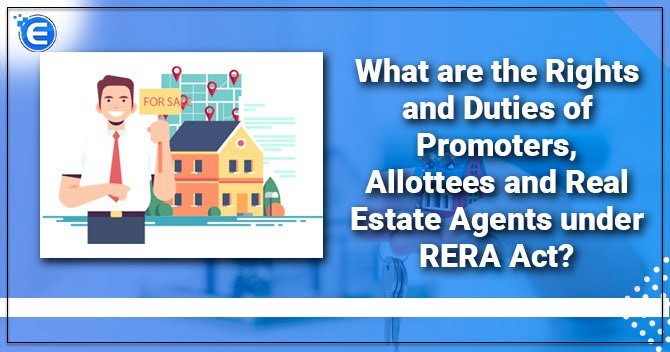 RERA has defined the complete functioning of promoters, allottees, and real estate agents. In this article, we will discuss the right and duties for these real-estate players.

RERA stands for Real Estate Regulatory Authority and was brought in to bring transparency in the real estate sector. It has made it mandatory for all builders or developers to do RERA registration before they commence a project.

What are the Functions & Duties of Promoters as per RERA?

Promoters are required to promote the real estate project that was developed or constructed by the developer. Promoter has been defined under relevant sections of RERA Act[1].

Under the RERA Act, there is compulsory registration of Promoters and every project must be registered with the RERA. In order to protect the interest of allottees, the Act has imposed various obligations and restrictions on the Promoter to ensure fairness and transparency in their dealing with allottees.

Following are the functions and duties of the Promoter:

What are the Rights and Duties of Allottees under RERA?

Following are the functions and duties of the Allottees:

What are the Functions and Duties of Real Estate Agents under RERA?

Following are the functions and duties of the Real Estate Agents under RERA:

It may be noted that Unfair Trade Practice here means a practice of making any written/visible/oral statement that falsely represents that services are of particular grade or standard or if it represents that the promoter has approval or affiliation which he doesn’t have or if he makes false or misleading representation.

These real estate players have a task cut out to play the role and perform their functions and duties as stated under RERA. Non-compliance from promoter, allottees or agents under RERA may result in penalties. In case you have any query related to the same, contact Enterslice.

Importance of Sanctioned Plan in RE...

Before the introduction of RERA Act, 2016, the developers amend the original layout and sanctio...

Maharashtra Co-Operative Societies can be registered with at least 10 persons and registration...