Consumer Court or RERA: Where can homebuyers go? 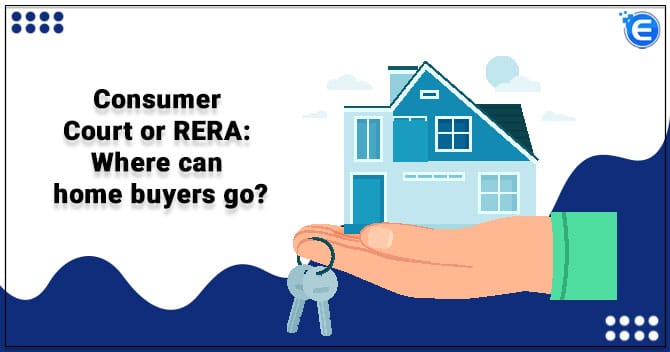 After the enactment of Real Estate Regulatory Authority, real estate firms have taken stand that the consumer forum has no right to administer to the complaints of homebuyers against such real estate firms. The question has been raised repeatedly if the complainant can claim benefits under the Consumer Protection Act if there’s an alternate remedy available. Consumer Court or RERA- where would homebuyers go? In this article, we shall try to reflect upon the present position of homebuyers and interplay of remedies between RERA and Consumer Protection Act.

Consumer Court or RERA: Stance of the Supreme Court

This ruling was propounded by the Supreme Court of India in the case of M/s Imperia Structure Ltd vs Anil Patni and another. The division bench having justices U Lalit and Vineet Saran, pronounced the judgement. The Supreme Court also observed that the date of calculating the delay shall begin from the date of buyer’s agreement and not on the basis of development project under the RERA Act.

M/s Imperia Structure Ltd vs Anil Patni and another: Facts of the case

In this case, the homebuyers booked flats under a housing project by the builder through the Builder Buyer Agreement in 2013. The promise was made to deliver the possession of flats in the year 2018. However, after 4 years of the buyer’s agreement, no construction work was done by the developer on the proposed site of construction.

Intending to claim compensation, buyers approached the National Consumer Disputes Redressal Forum in the year 2017. The Forum passed an order asking to return the money to all homebuyers with interest from the date of depositing money. The forum also ordered to pay an amount of 50000 rupees as litigation cost to each homebuyer involved in litigation before the forum.

Developers were not amused by this order of the Forum, and they approached the apex court challenging the jurisdiction of the National Consumer Disputes Redressal Forum to entertain the dispute.

Judgement of the Supreme Court

The Supreme Court recognized the importance of the RERA act in giving its share of benefits to homebuyers and to developers. The court observed that although RERA is a special legislation, it doesn’t bar the jurisdiction of other courts just because of its special nature. The Act should not be interpreted in isolation but should be read in addition to other acts.

The court relied on past judgements and derived the legislative intent of RERA that it gives an opportunity to the buyer if he wishes to initiate a proceeding under the Consumer Protection Act or wishes to file under RERA Act. The court concluded that section 71(1) of the RERA Act provides a right or a choice and not a compulsion to the buyer to transfer the case before RERA.

This judgement of the apex court has explained that the allottees have the option to choose between Consumer Court or RERA to practice their privileges in a land project. This judgement also sort of ends the dominance of developers over buyers through money power in litigation matters.

However, this liberty of buyers may be misused and can further add to the pending heavy backlog of cases.

This move can be good in a sense that it can balance the consumer interests and promoter’s interest by imposing certain responsibility on them. This can ensure that the homebuyers’ interests are not sacrificed at the cost of irregularities of developers.

Therefore it can be understood from the SC ruling that allottees that fall within the purview of the expression Consumer can approach the consumer forum to avail remedy available therein.

It can be concluded that this judgement of the Supreme Court has clarified the legal position with respect to the option of choosing a forum for registering grievances against the builder should lie with the homebuyers where they are at liberty to choose between Consumer Court or RERA.

Read our article: How to file a Complaint against Project under RERA or Not registered with RERA?

Real Estate Sector is taking an exceptional plunge year after year. But this real estate sector...

Maharashtra Co-Operative Societies can be registered with at least 10 persons and registration...

There has been a rapid increase in the developers, builder, and promoters who after the initial...