How to file a Complaint against Project under RERA or Not registered with RERA? 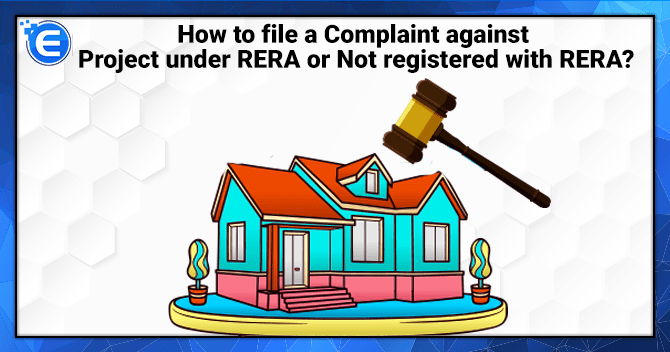 RERA stands for Real Estate (Regulation and Development) Act. The Act was enacted in the parliament in May 2016 and came into force from 1st May 2017. RERA is an act for regulating and promoting the real estate sector to ensure the sale of apartments, plot, or building efficiently and transparently. Also, the Act aims to protect the interest of consumers. The Act is required to resolve the issues in the real estate sector pertaining to the projects. Since the formation of RERA, it is acting as a guard for the buyers from fraud builders in India. In this article, we will focus on how to file a complaint against project under RERA or not registered with RERA.

The Real Estate (Regulation and Development) Act, 2016, safeguards buyers’ interest against all the builders and the developers’ fraudulent activities. The implementation of RERA ensures fair trades practices. It provides the buyer’s rights to lodge a complaint against builder or developers for non-compliance of the projects under RERA.

The buyer can file a complaint about the projects under RERA or non- RERA. The Act provides a grievance mechanism to protect the interest of the home-buyers for fraudulent activities. The Act has entirely transformed by setting up an authority where the seekers can file the complaint.

On the other hand, this remedy does not apply to buyers who have completed the transaction before implementing the Act. In this case, the buyers have to register their complaint at the other redressal forum, namely, consumer forums.

Complaints against registered Project under RERA

It is mandatory for all the developers and builders to register their projects under RERA. This allows the buyers to have regular updates on the development of an under-construction project and file complaint to the authority, against the buyers and the developers, in case of any grievances.

Section 31 of the RERA Act, 2016, talks about an aggrieved person can file a complaint to the authority against the builder or developer related to the project under RERA. The complaint can be filed under Form ‘A’ of Section 31 of the RERA Act, 2016[1]. The complainant should enter the details along with the registration number of the project, builder or developer and the details against whom the complaint is made.

How to file a complaint for a project under RERA?

The aggrieved person must follow the following steps to file a complaint under RERA:

Step 1- Visit the State’s official website to file a complaint online. Alternatively, one can file an offline complaint as well.

Step 3- Pay the requisite fee as per the state regulation across the nation. The fees vary from state to state.

Step 4- If the complainant is not satisfied with RERA’s decision, he/she can file an appeal with the RERA Appellate Tribunal within 60 days from the date of RERA’s decision.

Grounds for filing a complaint for a project under RERA

A buyer can file an online or offline complaint with the RERA Authority for any violation or contravention of the Act’s provisions by a builder, developer, and promoter.

The grounds for which a complaint can be filed are as follows:

The buyer can file a complaint against the builder or developer for immediate delivery of possession or a full refund.

Suppose the buyer is misled by false advertisement on the basis of which he acted and deposited a sum with a promoter. In that case, he can file a complaint against the builder, developer, promoter and also against the endorser.

As per the RERA Act, 2016, a builder or developer can only ask for 10% of the advance payment, and if a builder asks for more than 10%, the buyer can file the complaint.

Under the RERA Act, all projects must be registered. A complaint can be filed against the developer or builder, by buyer, if a builder tries to sell or advertisement an unregistered project.

All the details, including sanctioned plan, layout plan, and government approvals regarding the project under RERA, must be uploaded on the respective states’ RERA website. Failure to which a complaint can be filed.

The promoter will have to compensate for any structural defects, or the quality of services, failure to which the buyer can file a complaint.

A promoter cannot transfer majority rights to any third party without the consent of the 2/3rd majority of allottees, and if he does, then the buyer can file a complaint.

Complaints against not registered Project under RERA

Many developers and builders have not registered their projects under RERA till now. The buyers in such projects are suffering from various problems related to that project. Now, the question comes, that where to file a complaint against the not registered project under RERA.

The rise in complaints against the builders or developers for the unregistered projects has created a call for a legal framework where such issues can be resolved.

RERA is acting as a shield to safeguard the interest of buyers for the registered project under RERA. The need of the hour for a legal framework where issues or disputes related to unregistered projects can be resolved.

Read our article: Importance of Sanctioned Plan in RERA Act

How Does RERA Help Buyers?

Homebuyers were earlier subjected to harassment by builders and developers. Homebuyers use to c...

What is the Impact of RERA on NRIs...