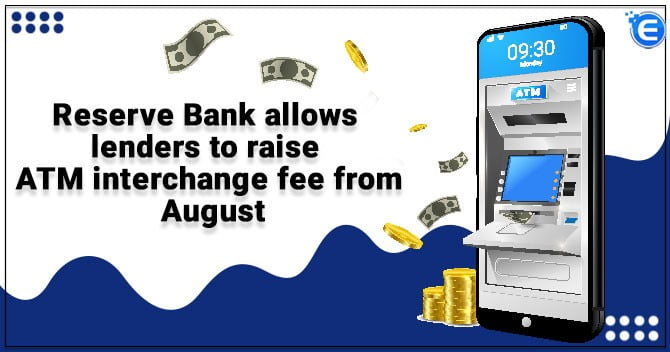 The Reserve Bank of India recently raised the ATM interchange fee that banks can charge on ATM transactions to 17 rupees per transaction. Earlier this fee was 15 rupees. It may be noted that the new fees will be effective from 1st August 2021.

What do you mean by the ATM interchange fee?

The card issuing bank is called the issuer, and the other is called an acquirer. The charge is divided between the acquirer and the company that maintains the ATM. This is the reason why banks tend to discourage customers from using ATMs of other banks.  The interchange fee has been a cause of quarrel between banks and ATM deployment companies, with the ATM deployment companies seeking a hike in the fee to 18 rupees per transaction earlier.

In June 2019, RBI constituted a committee under the chairmanship of VG Kannan, CEO of Indian Banks’ Association, to review the ATM charges. The committee recommendations were made public in July 2020.

The RBI stated that the recommendations of the committee had been examined comprehensively. It also observed that the last change in the interchange fee structure for ATM transactions was in the month of August 2012, whereas the charges payable by customers were revised last in August 2014.

After the end of free transactions, the ceiling on customer charges is 20 rupees per transaction at present, and it will be hiked to 21 rupees from January 2, 2022. This is expected to compensate banks for higher interchange fee and escalation in costs, RBI said.

Why the hike in ATM interchange fee?

Considering the increasing cost of the ATM deployment and expenses towards the maintenance of ATMs incurred by banks and white label ATM operators and also due to the need to balance the expectations of the stakeholder entities and customer convenience, the Reserve Bank announced its decision to increase the interchange fees for both financial and non-financial transactions.

Penetration of ATMs is expected to rise after this decision of hike by the RBI. Moreover, experts believe that it may incentivize banks as well as white label ATM deployers to set up increased number of cash dispensers, benefiting rural areas.

As per data from RBI, there were 213,575 bank ATMs in March 2021, slight increase of just over 1% from March last year. Apart from this, the number of white label ATMs that are set up, owned and operated by non-banks stood at 25k. The rural parts of India account for 20% of all ATMs in India.

The ATM industry confederation stated that the RBI decision to raise the ATM interchange fees would incentivize banks, managed services providers and white label ATM operators to raise the penetration of ATMs in semi-urban and rural areas, thus boosting the agenda of financial inclusion.

Read our Article: Interoperability of PPIs: RBI mandates pre-paid cards, wallets to be made interoperable

Stressing on the need for discipline, the Reserve Bank of India (RBI) disallowed banks from ope...

Recently, the Reserve Bank of India has proposed the Co-Lending Model scheme, where in the comm...

On June 24, the Reserve Bank of India issued guidelines that specify the eligibility criteria f...