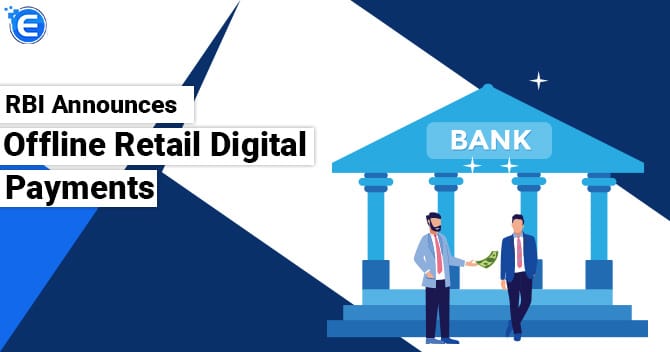 The Reserve Bank made an announcement recently on a nationwide framework for implementation of offline retail digital payments. Offline digital payments may not sound workable, but it is something that the banking regulator is pushing for. Lets’ discuss more on this update.

What do you mean by Offline Retail Digital Payments?

Such payments can work through cards, token or even through voice-enabled solutions. The main feature of this mode is that those without a smartphone can also access digital payments. For example- A customer will be given a card or token. It can be used on acceptance device without necessarily having an internet connection. Where there is no internet connection, the acceptance device would record the payment associated with the card/token and close the transaction. When the acceptance device collects a pre-decided limit, then it will not work until the merchant reconciles transactions with the PSOs and gets the payment.

The RBI Governor said that a scheme to test technologies that allow digital mode of payments in remote areas was announced last year. As the experience gained from the pilot tests was encouraging, it has been proposed to introduce a framework for retail digital payments in offline mode. It is expected to expand the reach of digital payments and also open up new opportunities for businesses and individuals.

Last year, the RBI had allowed small value offline transactions through cards and phones for payments upto 200 rupees on a pilot basis. Further, the RBI said that 3 pilots were conducted successfully under the Scheme in various parts of the country from September 2020 to June 2021. The RBI said that there is a scope to introduce such solutions in remote areas. Detailed guidelines will be issued by RBI in due course.

How is it expected to pan out?

Before this, India has once tried with offline digital payments where the National Payments Corporation operates structured supplementary service data or the USSD[1] based payment service. It allows customers to transfer money, check account balances and add other VAS through text messages and without the need for an internet.

Further, the RBI also announced that it will put in place a framework for Geo-tagging of Payment Acceptance Infrastructure. With geo-tagging, it is expected that exact locations can be traced where there is low digital payments or where it is not working to its full potential. This way, banks can devise strategies to address these problems.

Digital transactions have made people’s life more convenient. Now the RBI governor claimed that very soon payments can be made without the requirement of internet in the country. The objective behind this move is to bring digital payments into remote areas where there is no internet penetration.

Read our article:RBI extends access to Centralized Payment System to non-banks in phases

Statement on Developmental and Regu...

The Reserve bank of India recently issued various developmental and regulatory policies. These...