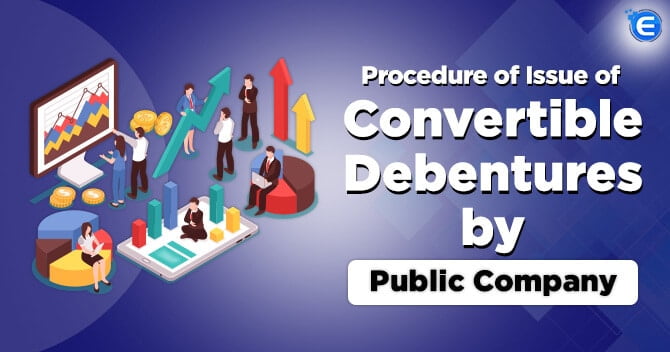 Section 2(30) of the Companies Act, 2013 defines “debenture” to include debenture stock, bonds, or any other instrument of a company evidencing a debt, whether constituting a charge on the assets of the company or not.

Provided that the instruments referred to in Chapter III-D of the Reserve Bank of India Act, 1934 shall not be included in the ambit of the term.

Debenture can be construed as a loan owed by the company to the subscribers of the instrument, bearing a fixed rate of interest and not carrying any voting right in the company.

Issue Of Debenture By Public Company

A Public Company may issue Debentures to raise funds by either Private Placement or a public issue by inviting the general public to subscribe to its debentures.

A debenture may be preferred over other sources of raising funds as:

A company oversee issue of Convertible debentures or securities by following the provisions of the Companies Act, 2013, and the rules made thereunder, namely Companies (Share Capital and Debentures) Rules, 2014.

Limits Specified Under The Companies Act, 2013

Section 180 of the Companies Act, 2013 imposes a restriction on the power of the Board of Directors.

Section 180(1) (c) specifies that to borrow money, where the money to be borrowed, together with the money already borrowed by the company will exceed the aggregate of its

The company shall be liable to take shareholders’ approval in a general meeting by way of a special resolution.

For the purpose of the above-specified limit, temporary loans obtained from the company’s bankers in the ordinary course of business shall not be included.

The ambit of the term ‘Temporary loans’ is restricted to loans repayable:

Procedure To Be Followed For Issue Of Convertible Debentures

Section 179 (3)(d) of the Companies Act empowers the Board of Directors to borrow monies, after passing a resolution at the board meeting (In case of section 8 companies, such resolution shall be passed by circulation and not at the meeting of the directors), i.e., if the company resolves to borrow monies within limits specified in section 180(1)(c), it may borrow such amount, without calling a general meeting of the shareholders. In such a scenario, a Board Resolution passed at the meeting of the Board of Directors is sufficient.

However,  as per Section  71(1) of the Companies Act, 2013 if a company wants to issue Debentures which are Convertible into Equity shares of the company, either wholly or partly, at the time of redemption of the debentures, approval of shareholders by way of Special Resolution is mandatory. Thus, for issue of convertible debentures, shareholders’ approval is needed.

In case the company intends to borrow monies which exceed the limit specified under section 180(1)(c), a special resolution in the meeting of shareholders is to be obtained for the purpose of granting permission to the Board of Directors of the Company to borrow monies up to a specific limit. This is also known as blanket resolution since it sets the upper limit for the amount which may be borrowed by the Board without the need to call for a general meeting next time they intend to borrow money on behalf of the company.

The procedure to be followed for issue of convertible debentures is as follows:

Conditions To Be Kept In Mind While Issuing Debentures

However, such reserve is not mandatory if the debentures are fully convertible into equity shares of the company.

If the debentures are partly convertible, the reserve has to be created for the non-convertible portion of debentures only.

Direct, the company to redeem the debentures forthwith on payment of principal and interest due thereon.

Applicability Of Chapter V Of The Companies Act And Companies (Acceptance Of Deposits) Rules, 2014

As we see above, in case the company issues unsecured debentures, which are not convertible within 10 years of the date of issue, it has to comply with additional compliances pertaining to deposits.

With a wide array of specifications in this form of security and municipality of laws governing companies, apt selection of procedures and adequate compliance of such laws becomes a crucial task, not only for the company’s reputation but also for saving the companies and the officers in default from hefty penalties and punishments.

See Our Recommendation: Bearer Debentures: Everything You need to know.

Ridhima is a commerce graduate and aspires to be a Company Secretary. Her interest in exploring new domains of corporate laws drives her towards this field.

What is Class Action Suit? One or more than one person can bring the legal suit. But sometimes...

A Draft containing certain rules was published in official gazette regarding the amendment in E...

Types of Committee as per the Compa...

For improving the Board’s effectiveness and efficiency, Committees or ‘Board Committees’...