Procedure for Issue of Shares on Preferential Basis Under Companies Act 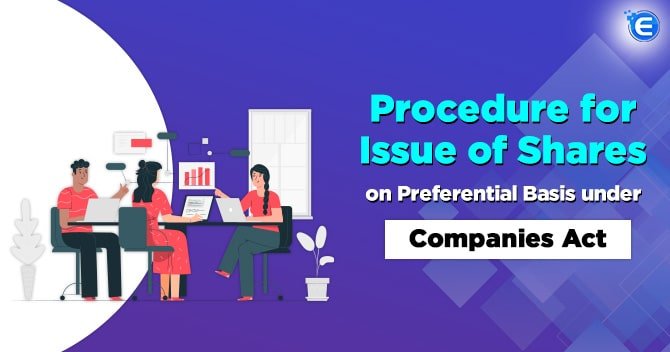 According to the Companies Amendment Act 2017, a Company can raise funds or Capital mainly in three ways: (1) Private Placement/ Preferential Allotment (2) Right Issue (3) Bonus Issue. According to the provision of Section-62 subsection (1) clause (a) at any time, a company having a share capital proposes can increase its subscribed capital by issue of shares. Such shares are offered to people who, at the time of the offering, are the holders of the equity shares of the company in any proportion. The preferential allotment of paid-up share capital is issued by sending the letter of offer for those shares before its issuance.

Conditions while Issuing Shares by a Company

In the case of the public company

According to Section- 62 (1) (a), the issue of shares is proposed, to the equity shareholders, of the company in proportion to their paid-up share capital. These shares are offered on right basis by sending a letter of offer fulfilling the prescribed conditions. The AOA provides guidance regarding the offer of rights issue of shares and the person concerned who wants to renounce his shares or offer it to any other person. The Board Resolution for considering the issue of shares on right basis cannot be passed by circulation as per Section- 179(3) (c). The meeting is conducted to draw the final conclusion.

See Our Recommendation: Procedure to Issue Shares through ESOP.

Procedure for Issuance of Duplicate...

Registrar and Transfer Agent or the registrar and share transfer agents are the authorized inst...