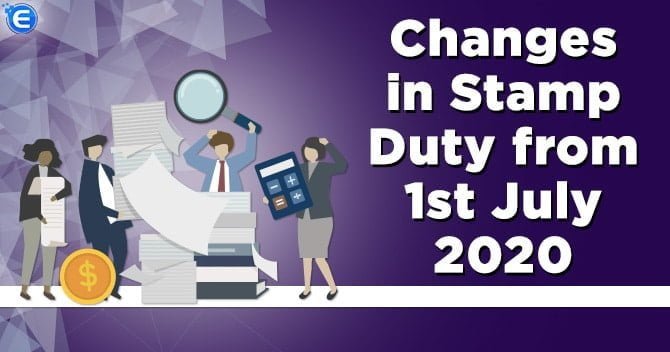 The Government of India recently announced certain changes to the stamp duty, which will be effective from 1st July 2020.  The changes in stamp duty were earlier scheduled to be implemented from January, but it was put off to April and then July.

Formerly stamp duty was being levied on different rates by different states which creates jurisdictional disputes. Now, there will be uniform rate of stamp duty on the transfer of shares.

Collection of the Stamp Duty on State Government’s behalf: Changes in Stamp Duty

The stamp duty on sale, transfer, and issue of securities will be collected on behalf of the state government by the Stock Exchange, or Clearing Corporation authorized or depositories. The Central Government has also notified Clearing Corporation of India Limited and the registrars to issue and or share transfer agents to act as collecting agents.

Transfer of Stamp Duty to each state: Changes in Stamp Duty

In the notification, RBI has stated that the collecting agents shall transfer the stamp duty collected to the State Government wherein the residence of the buyer is located. It shall be transferred within three weeks of the end of each month.

Where the buyer is located outside India, it shall be transferred to the State Government having the registered office of the trading member/ broker of such a buyer.

If there is no such trading member of the buyer, then it shall be transferred to the State Government having the registered office of the participant.

It may be noted that the collecting agent will transfer the collected stamp duty in the account of concerned State Government with the RBI or any scheduled commercial bank.

The stamp duty was a state subject, and it was collected by some states as a fixed amount based upon the value of a securities transaction. Some states have abolished it on many transactions, whereas some states used to levy it on different transactions at different rates. The Stamp Duty Act[1] that comes into effect from 1st July, 2020, stamp duty collected in the country will be uniform.

Some states used to levy low rates on speculative trades, which caused tax arbitration. This will be eliminated due to the uniform rate in the country.

Information to the State Government in respect of Stamp Duty collected: Changes in Stamp Duty

The collecting agent is required to submit a return of collected stamp duty on various transactions to the State Government, including the details of defaulters in the prescribed format on a monthly basis, which must be furnished manually or electronically within seven days of the succeeding month.

The collecting agent shall further furnish a consolidated return of collected stamp duty during a financial year either manually or electronically on or before 30th June immediately following that financial year to the concerned state government and the accountant general of each state. The State government can provide an online facility through which a collecting agent will upload state-wise yearly and monthly return.

There shall be an imposition of stamp duty on mutual investments at 0.005%. It will apply to the purchase of mutual funds units, including lump-sum investments and through systematic investments plan and systematic transfer plans.

Investors having mutual funds issued against purchase transactions would be subjected to the levy of stamp duty at 0.005% of the invested amount. Moreover, the transfer of mutual fund units between Demat accounts will attract stamp duty at 0.015%. The stamp duty shall be applicable to all mutual funds that are equity, hybrid, index funds, debt, and exchange-traded funds.

Calculation of Stamp Duty in case of issuance of mutual fund units: Changes in Stamp Duty

The stamp duty is imposed on the value of units, excluding other charges such as service charge, AMC fee, GST fee, etc. In case where the units are issued for one crore rupees, then 500 rupees would be the stamp duty to be remitted to the states.

It may be noted that the issue of fresh units in the switched scheme will attract stamp duty even though there isn’t any physical consideration paid or transfer of ownership. It is owing to the fact that the new units are deemed to have been purchased with NAV (Net Asset Value) realized from the sale of earlier units.

Penalties under the Stamp Act and rules

As stated earlier, the collecting agents are required to transfer the duty to the State government in three weeks of the end of each month. In case where any collecting agent fails to collect the stamp duty or fails to transfer the stamp duty to the State government within the prescribed time period, will be punished with fine which will not be less than one lakh rupees but it may extend to one % of the collection or transfer so defaulted.

In case where a collecting agent fails to submit details of transactions to the government or submits a false document or makes a false declaration or which the person knows to be false, shall be punished with fine of one lakh rupees for each day during which such failure continues or to one crore rupees, whichever is less.

The amendments in the Indian Stamp Act, 1899 was made with a view to eliminating multiple rates for the same instrument, which creates jurisdictional disputes and numerous incidences of duty.

Overview Companies rely on funds to manage the affairs of their business successfully. Sharehol...

The word ‘transfer’ is an act of the parties by which title to a property is transferred fr...