Penalty for Breach of Section 269SS of the Income Tax Act, 1961-Judgement 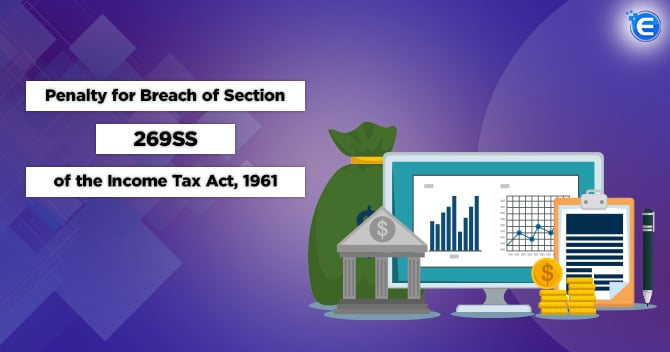 Finance plays a significant role in every business. In many circumstances, the own finances of an individual are not sufficient to fulfill the requirements of his or her business, so he has to take loans or deposits. There are some restrictions imposed by the Income-tax Department under section 269SS.

In this article, we will discuss a recent judgment of Kerala High Court where the assessee –a society who conducted finance business violated Section 269SS of the Income Tax Act, by accepting deposits in cash from its clients, exceeding a sum of Rs. 20,000. Hence, the penalty was imposed on the assessee as per section 271D

The assessee argued that there were lack of banking facilities in the area etc. But the court rejected the argument stating that this point cannot be accepted as reasonable cause for accepting deposits in cash exceeding the set prescribed limit that too when the assessee was doing a large scale finance dealing with the public.

According to Section 269SS  of the Income Tax Act, 1961 any deposit, loan or any specific amount should not be accepted or taken from any person/individual other than an account payee cheque or by an electronic clearing system through a bank account, if-

The provisions of Section 271D lays down the penalty as enumerated below:

The assessee shall not be levied any penalty if he proves that there was a reasonable cause for the breach of Section 269SS of the Income Tax Act, 1961.

The case before the High Court of Kerala “N.S.S. Karayogam vs. Commissioner of Income Tax.”

Summary of the Case

The assessee, a society defaulted in the mode of accepting payment/deposits in the assessment year 2005-2006. The assessing officer found that the assessee society conducted finance business by violating the provisions laid down in section 269SS of the Income Tax Act, 1961. They accepted deposits/payments in cash from various clients exceeding a sum of Rs. 20,000 and hence imposed a penalty as per Section 271D.

The question that arises here is whether the claim of being unaware about the provisions of laws or an argument made regarding lack of banking facility in the area can be accepted here as reasonable cause for accepting deposits in cash, when the assessee was doing large scale finance business dealing with the public. Whether it should be proved that there existed any reasonable and acceptable cause for not accepting the loans through crossed cheques or demand drafts is a mere proof regarding the genuineness of transaction or intention in accepting cash or that there was no attempt to induct black money into the business. It cannot be considered as a reasonable cause or an extraordinary situation provided in section 273B to avoid penal action under section 271D.

Whether when knowingly an assessee was a company doing finance business of money lending and receiving deposits, the contention of the assessee that both parties to transactions were having agricultural income and, therefore, transactions would fall within the purview of 2nd proviso to section 269SS could be accepted.

Read, Also: Process of Filing of Appeal Before NCLT.

Whether, on facts, the assessee would not be protected by provisions of section 273B and penalty was rightly levied upon assessee under section 271D.

The cases referred to while making Judgments are as follows:

Counsels for the Case:

Advocates for the Respondent

The assessee society had filed this appeal challenging an order of the Income-tax Appellate Tribunal of the Cochin Bench in ITA No. 475/Coch/2018, dated 8-5-2019, where its appeal was dismissed by the appellant challenging an order of the first appellate authority, which is the commissioner of the Income Tax(Appeals), dated 9th July, 2018. The respondent in this appeal is Revenue.

The assessing authority recommended that the penalty provision to be made as per section 271D of the Income Tax Act. This was initiated by the Additional Commissioner of Income Tax, Alappuzzha Range. To a notice proposing the imposition of penalty, the appellant replied that it is a charitable organization rendering social services to the weaker section of the society, having no income chargeable to tax under provisions of the Act. It is stated that the appellant was under a bona fide belief that the provisions of the Income-tax would not apply to them, being a charitable organisation. It was contended that, under the 2nd proviso to Section 269SS, there exists an exemption because the depositor, as well as the acceptor, has got agricultural income. It was also contended that the violation, if any, was only due to the ignorance, which need to be condoned. At the time of hearing afforded to the appellant, the contentions were reiterated. The original authority found that the transactions in question will not fall within the category provided under the 2nd proviso to Section 269SS of the Income Tax Act. It was held that there occurred a clear contravention of Section 269SS on the part of the assessee, without any reasonable cause and that they are liable to be imposed with penalty under section 271D. The contention based on the ignorance, put forth, was not accepted, by holding that the assessee was doing large scale finance business dealing with the public, extending to crores of rupees. Therefore the ignorance of the provisions of law cannot be put forth as an excuse. It is further found that the contention put forth to the effect that the appellant had no motive to violate the law will not, in any manner, help the assessee to escape from the penal provisions. Therefore penalty to the tune of Rs. 4,74,46,248/- was imposed under section 271D.

The appellant was unsuccessful in the first appeal filed before the CIT (Appeals). They were also unsuccessful before the Appellate Tribunal in the first round of the second appeal. In an Income-tax Appeal filed for challenging the said order before this court, in ITA No. 19/2014, the matter was demanded for fresh consideration by the Assessing Officer. It was considered before based on the decision reported in K.V. George v. CIT [2014] that the authorities have failed to consider the aspect of ‘reasonable cause’ contemplated under section 273B, on the factual matter that there existed no banking facility in the locality and most of the depositors are pensioners and agriculturists.

It was also argued that there could be more than one reason as to what was the need to accept the money in cash , also ignoring the provision or stating  non-availability of banking facility in the locality, area etc. Further, the debate was raised to the effect that there was failure to ensure if the entire cash receipts were the subject matter of penalty, were above Rs. 20,000/- or below. This court found that going through the orders of the Assessing Officer and the first appellate authority and Appellate Tribunal. There exists inconsistency in the explanations of the assessee with respect to what was the ‘reasonable cause’ for receiving the amounts in cash in violation of section 269SS. This Court found that, while referring to the scope of section 269SS of the Income Tax Act, 1961 in K.V.George’s case (supra) it was clearly held that, the only consideration would be as to what was the ‘reasonable cause’ for receiving such a big amount of money by way of cash or what was the reason for not receiving the loan or deposit by way of account payee check or demand draft. It was found that the burden is on the assessee to establish such ‘reasonable cause’ in a convincing manner. However, the matter was remitted back by this court to the Assessing Officer for fresh consideration, mainly on the basis that it has to be re-checked as to whether all the transactions are with respect to amounts above Rs. 20,000/-. Incidentally, it was observed that even though there is no specific, consistent stand with respect to the reasonable cause, since the matter is remitted back, no prejudice would be caused to the revenue if an opportunity is given to the assessee to explain such transactions. Therefore the officer was directed to accept the explanation if any offered by the assessee.

Judgment of the Case

Subject to the above observations, we do not find that any substantial question of law existing warranting interference with respect to the impugned order passed by the Tribunal. Consequently, the Income-tax appeal fails, and the same was dismissed as limine. The court did not accept any further evidence for making judgment in this case.

In the mentioned case, the loans taken by the appellant did not fall in the agricultural income category.  The assessee is not earning only agricultural income, so the exemption criteria did not work here. The assessee also was not working as a banking company as per the Banking Regulation Act nor as NBFC. So it had to pay the penalty as per provisions laid down in Section 271D of the income tax Act.

Also, Read: Read About the Procedure for Appeal Under The Income Tax Act.

Over the years, the process of withdrawal of provident fund balance by an employee has been mad...

Analysis of Tax on Exempt Income...