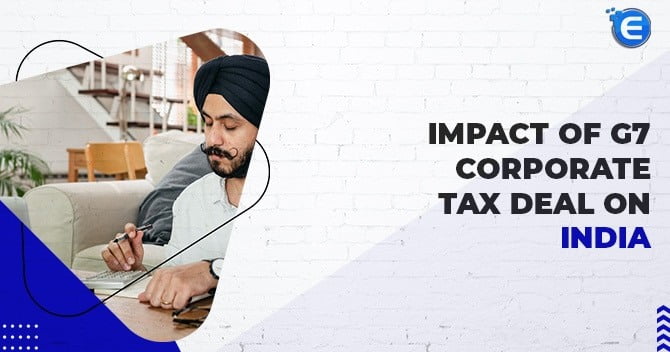 Advanced economies forming a part of the G7 group reached a historic deal on taxing MNCs (Multi-National Companies). Finance ministers met in London and agreed to counter tax avoidance through ways to make companies pay where they do business. Moreover, they agreed in principle to ratify a global minimum corporate tax rate to counter the possibility of countries undercutting each other to get investments. This G7 corporate tax deal was announced on June 5 2021, and is expected to be put before G20 meeting later.

It is an organisation comprising of 7 of the world’s largest economies. It includes the United States, the United Kingdom, Canada, France, Germany, Japan and Italy.

Two significant decisions were agreed upon with respect to the G7 corporate tax deal. It was introduced to tighten tax loopholes that were used by Multinational Companies.

Among the two decisions taken in the meeting, the first decision was to enable a country to tax profits earned by the MNC based on the revenues generated in the said country instead of the country where the MNC[1] is situated. In simple words, this decision results in the MNC being taxed where they function.

The second decision was taken to introduce a global minimum corporate tax rate of 15%. The agreement proposed at the G7 meeting will be discussed further in detail at the G20 meet in July between governors of the Central Bank and finance ministers.

In a report by the G7 Finance Ministers and Central Bank Governors Communiqué, it was stated that “We commit to reach an equitable solution on the allocation of taxing rights, with market countries awarded taxing rights on minimum 20% of profit exceeding a 10% margin for the largest and most profitable multinational enterprises”. The report further stated that “We also commit to a global minimum tax of minimum 15% on the basis of country by country. We agree on the importance of progressing the agreement in parallel on both pillars and look forward to reach an agreement at the July G20 Finance Ministers and Central Bank Governors meeting.

Challenges of the plan

It could pose a challenge to get all major nations on the same page, significantly since it impinges on the right of the sovereign to decide the tax policy of a nation. This proposal has other challenges too.

A global minimum rate may take away the tool that countries use to push policies that suit them. Let’s take an example here, in the backdrop of the Covid-19 pandemic, as per IMF and World Bank data, developing countries with less ability to provide mega stimulus packages may experience a more prolonged economic standstill as compared to developed nations. A lower tax rate is a tool they can use to push economic activity alternatively. Moreover, a global minimum tax rate may not be enough to counter tax evasion.

Companies that could be impacted by the G7 corporate tax deal

The first pillar of the said tax deal may affect more than 100 global MNC giants like Facebook, Alphabet, Nike, Apple, and many others. Some of the companies move their headquarters to low-tax jurisdictions to lower their total tax revenues.

The second pillar of minimum global corporate tax rate may affect more than 8,000 companies, including giants such as Amazon and Facebook.

How will G7 corporate tax deal impact countries such as India?

The G7 corporate tax deal is expected to boost tax revenues for the US and other western European countries. However, it can be resisted by countries like Luxembourg, Hungary, Ireland, Cyprus, and the Caribbean countries, attracting multinationals with their low rates of tax.

However, India should not be affected by the global minimum tax rate as our corporate tax rates stand higher at 22%. India reduced its corporate tax rates in 2019 from 30% to 22%. Existing domestic companies had to follow certain conditions, including the condition that they do not avail of any deductions or specified incentives. Further, existing domestic companies who opt for the concessional tax rates don’t require paying a Minimum Alternate Tax (MAT).

We may have to wait for the G20 discussions. However, the G7 Corporate tax deal may face a lot of resistance from nations with low tax rates, and it would be difficult to come to a consensus. As stated above, experts believe that minimum tax rate may not be enough to counter tax evasion.

Read our Article: Income Tax Rules Changes from April 1 2021: Here’s all you need to know

Prosecution and Punishment Under In...

There is a penalty and Punishment Under Income Tax for the various offense. Apart from that the...

Filing of Income Tax Return is the process of submitting a declaration about the income earned...