Payment of Distribution Fees is not Royalty: ITAT Bangalore 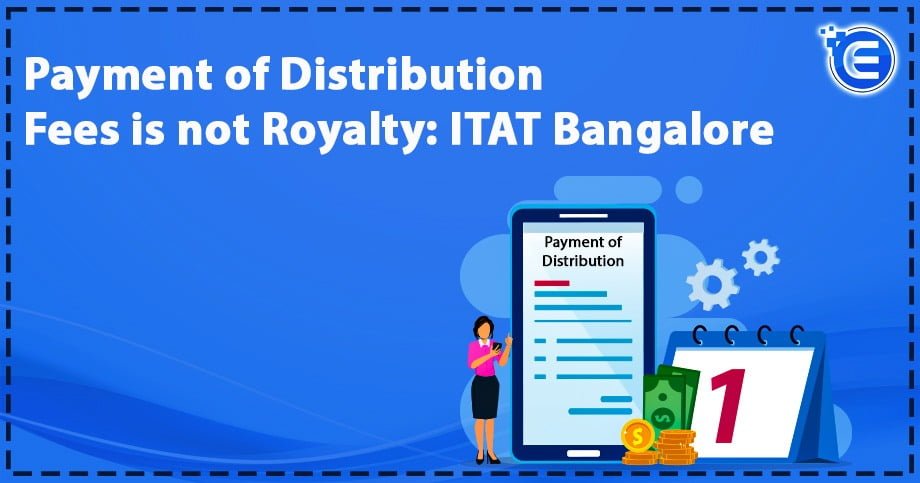 ITAT Bangalore passed a remarkable judgement on 19th October 2022 in the case titled M/s. Google India Private Limited Vs The Deputy Commissioner of Income Tax (International Taxation), wherein the tribunal dealt with the appeal of the assessee seeking clarity concerning whether distribution fees paid to Google Ireland by the assessee for the distribution of Adwords programmes must be treated as royalty or not.

The article discusses the case in detail to provide a better understanding of the tribunal’s stand on the issue raised by the assessee.

Whether distribution fees come under the ambit of royalty?

Contentions of the Parties

The contentions of the parties are as follows –

The assessee stated that the purchase of online advertisement space can’t be termed as ‘Royalty’, and hence, the same isn’t chargeable to tax in this country as there wasn’t any Permanent Establishment (PE) of the non-resident in India. Hence the contention of the assessee was regarding the payments being in nature of business profits that must be taxed in Ireland rather than India.

The revenue contended that according to the agreement, the assessee was responsible for uploading the online advertisement along with providing after-sales customer support involving the use of IPRs, which Google Ireland provided under the service agreement.

It was further observed by the tribunal that Google Ireland had the Google AdWords Program Distribution Agreement with the company for accommodating Indian advertiser(s) that desire to make payment in Indian Rupees instead of foreign currency, whereunder the assessee was designated to be the non-exclusive distributor of online advertisement space in India. However, the Indian advertisers who wanted to make payments in foreign currency continued to transact directly with Google Ireland.

The fact that the features of Google Adwords remained the same irrespective of whether it was being purchased from Google Ireland or the assessee was well noted by the tribunal, along with the fact that the advertisers can only make the payment once the end user clicks the said Ad.

Another observation was regarding Art. 12(3)(a) of the DTAA of India – Ireland, wherein the term ‘Royalty’ included the consideration received for the right to use or using any copyright of literary, scientific or artistic work, inclusive of any tapes or cinematograph film(s)for television broadcasting or radio. The Tribunal also noted that the “Google AdWords Program” is a computer program, i.e., computer software.

The tribunal referred to the judgement of the Apex Court in Engineering Analysis Centre of Excellence Private Limited vs CIT & Anr. Abut its ruling in respect of Explanation 2(v) to Sec- 9(1)(vi) of the IT Act, when it provides for “all of any rights … in respect copyright”, is more elaborate than the provision of DTAA, which provides for the right to use or “use of, “any copyright.

Additionally, the Apex Court had ruled that just the using or having the right to use a computer program in the absence of any transfer of underlying copyright in it according to Sec- 14(a), (b) or Sec- 30 of the Copyright Act, 1957, won’t satisfy the definition of ‘Royalty’ under the IT Act or the DTAA (Double Taxation Avoidance Agreement)

The ITAT[1] has clarified that the distribution fees paid by Google India to Google Ireland cannot be considered Royalty as the intellectual property remained the sole property of Google Ireland. Therefore, the tribunal allowed the appeal of the assessee, thereby providing the clarification sought by the assessee.

Read Our Article: Payment made to a Non-resident Supplier amount to Royalty- ITAT Case Law

The finance bill has proposed to add Section 194R to the Income Tax Act 1961. Although this cha...

No Prosecution against the Assessee...

The High Court of Delhi pronounced a judgement in the case of Vipul Aggarwal Vs Income Tax Offi...