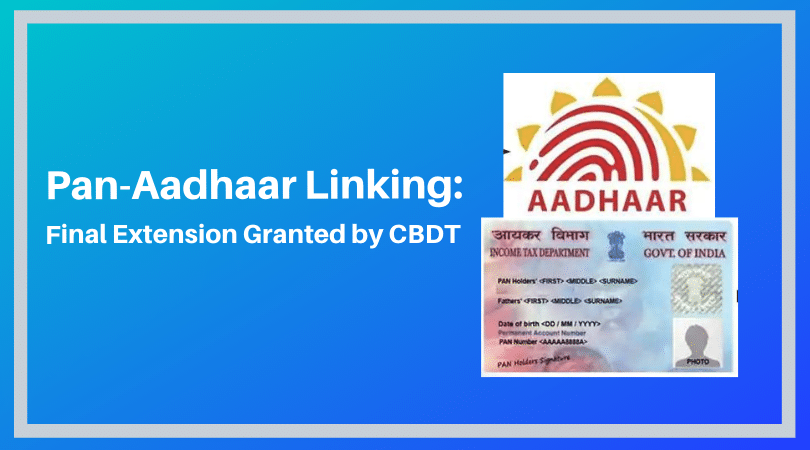 Having been extended multiple times earlier, the income tax department finally comes up with a formal notification dated 13th February 2020 to set up the deadline for PAN-Aadhaar linking as 31st March 2020. Prior to this, the last date for individuals to link their Aadhaar with PAN was 31st December 2019.

The CBDT has amended the income tax rules vide Income-tax (5th Amendment) Rules, 2020 so as to officially put a final deadline on the date of linking of PAN with Aadhaar. A new Rule 114AAA has been inserted in the Income Tax Rules, 1962 which says that PAN of a person shall become inoperative if PAN has been allotted up to 1st July 2017 and the person fails to link it with Aadhaar on or before 31st March 2020.

If PAN-Aadhaar linking is not done by a person on or before 31st March 2020, his PAN will be legitimately considered as inoperative for all the purposes of furnishing, intimating or quoting the same under the Income Tax Act.

The CBDT has also clarified that if a person who is required to quote his PAN under any provision of the Act fails to link his Aadhaar, it shall be assumed that he hasn’t furnished or quoted his PAN. Apparently, it will cause such a person to be liable for all penalties/consequences as laid down under the Act for non-furnishing of PAN to the requisite authorities.

Furnishing and quoting of PAN is a pre-requisite for entering into several financial transactions. The department has now stipulated that such a condition of providing PAN in respect of financial transactions will be assumed to be non-complied if a person fails to link his Aadhaar. In that case, his PAN shall become inoperative, irrespective of the fact that whether he has furnished it or not. As a consequence, he will have to bear the aftermaths of not meeting the Income Tax provisions (more specifically, not furnishing PAN).

Despite setting up of a deadline by the department, the taxpayers are allowed to link their Aadhaar with PAN even after 31st March 2020.

For this, Rule 114AAA specifies that where PAN-Aadhaar linking is done after 31st March 2020 by a person, his PAN shall again become operative from the date of such intimation, and it will be considered as valid for all the purposes of income tax provisions thereafter.

Thus, a person will have to bear the consequences of not furnishing his PAN (or not linking his PAN with Aadhaar) only from the date of entering into a financial transaction for which intimation of PAN was mandated to the date of PAN-Aadhaar linking.

Consequences of not linking Aadhaar with PAN

Where due to the non-intimation of Aadhaar by 31st March 2020, an individual’s PAN is turned to be inoperative, it will be considered that he had not furnished PAN at places where he was ought to quote the same in accordance with the income tax provisions. In other words, the PAN supplied by him will be treated as non-binding, and they will be debarred from doing transactions where the quoting of PAN is mandatory.

If PAN is not linked with Aadhaar, individuals will be deemed as not holding PAN, and they will have to bear the consequences of failure to furnish PAN under the Income-tax provisions.

First of all, the filing of income tax returns by the taxpayers will not be possible if they are holding an inoperative PAN. Moreover, while deducting an employee’s tax at source, the onus is on the employers to quote the PAN numbers of their employees. The non-availability of PAN of an employee may attract a higher rate of tax deduction by the employer. In addition, non-furnishing of PAN is an offense punishable under the tax laws with a penalty amount of Rs. 10,000. To take another example, TDS on interest income on fixed deposits with a bank may be subjected to a higher rate of tax @ 20% in case the PAN is not provided by the deductee.

How to do PAN-Aadhaar linking

Persons may link their PAN with Aadhaar either through the income tax e-filing website or by sending an SMS to 567678 or 56161. For updating it online, a person needs to visit the Income Tax PAN-Aadhaar link and provide details of his PAN, Aadhaar, name, etc.

The Official notification may be downloaded from the below link:Income tax PAN to be inoperative

In an endeavor to target the farmers, the Union Government in its 2018-19 budget had announced...