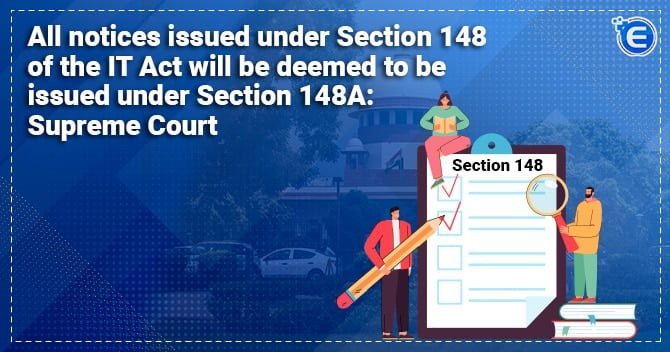 Amendments to the Income Tax Act

Before the Finance Act of 2021, reopening was allowed for maximum 6 years period and in certain cases, even beyond 6 years which led to uncertainty. Therefore, parliament amended the income tax act with a view to simplify the tax administration, ease compliances and reduce tax litigation.

The Court, while deciding an appeal against the order of the Allahabad High Court which had set aside reassessment notices issued by revenue department after 1st April, 2021 under the unamended section 148 of Income Tax Act, a bench of Justice MR Shah and BV Nagarathna passed some directions in respect of such reassessment notices.

After 1st April, 2021, close to 90000 reassessment notices were issued by the revenue department under Section 148 of unamended income tax act. The issuance of such notices was challenged before different high courts across the country in more than 9000 writ petitions. Different High courts had set aside the said reassessment notices.

The bench after hearing the submissions made and after perusal of statutory provisions and government notifications partly allowed appeals and exercising power under Article 142 of the Indian constitution directed the order of the HC to be modified as under:

Applicability of the Judgement

The court said that the directions issued by it shall have a pan India effect and not just on the impugned judgements. The directions shall govern all other similar notices issued under the previous regime.

The court said the present order will be applicable pan India and the judgements and orders given by various high courts on the issue and under which similar notices that were issued under Section 148 of the Act after 1st April, 2021 are set aside and will be governed by the present order and will stand modified to the extent described above.

The court further clarified that the order was passed under powers conferred under article 142 of Indian constitution so as to avoid further appeals on the very issue by challenging similar orders and judgements with a view to avoid burdening the court with 9000 appeals. Further the present order shall also govern the pending writ petitions that is pending before the high courts wherein similar notices under Section 148 of the Act issued after the said date are challenged.

Reasoning behind the judgement

The bench gave the rationale that the modifications stated above will strike a balance between the rights of the revenue and assesses. The court noted that the revenue cannot be made to suffer in this case when it had issued 90000 notices bonafide and if the revenue is penalised, it’s the public exchequer that will ultimately suffer.

The Implication of Income tax on th...

India as a country follows the joint family structure system and has so many festivals to be ce...

The Finance Act 2021 inserted a new section to provide relief to the senior citizens who is 75...