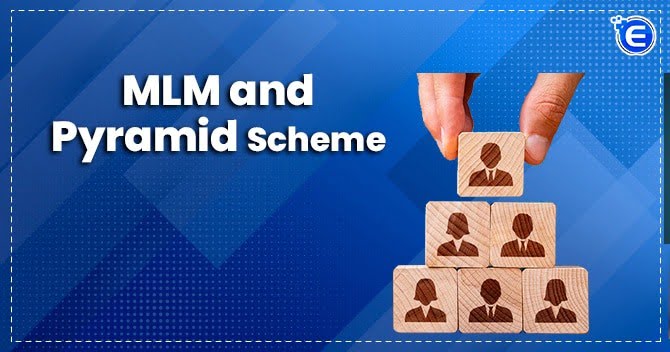 In modern times, business ideas are evolving at a high pace. Some ideas are legal, and some are devised to fraud people and steal money in a sophisticated manner to evade the law. The MLM(Multilevel Marketing) and Pyramid Scheme allow the opportunity to get absorbed in the business system at any stage, which is inconsistent with the standard business practices where businesses have to start from scratch. They offer training to the involved individuals for selling products and involving others to be a part of the scheme.

What is MLM Scheme?

The term MLM stands for Multilevel Marketing and is a business strategy used by direct sales organisation to sell goods and services. The MLM companies encourage their existing member to promote and sell the consumers’ products to earn money and bring new members into the business network. The recruiter gets rewarded whenever a distributor makes a sale.

What is Pyramid Scheme?

It is a scheme where the top-level organiser builds a pyramid structure that draws profit at the behest of person at bottom level who bears the losses. The initial investors get high returns on their investment to lure others participants for investments. RBI has repeatedly warned against the promises of high returns offered by these schemes run through chain marketing in India.

The difference between the MLM and Pyramid Scheme can be defined by the nature of the business operations they are involved in. The entire purpose of these schemes are to make profits by defrauding clients either by direct selling consumer products or by recruiting other individual seeking jobs.

The fundamental objective of MLM is to sell products and creates an extensive network of trusted buyers and distributors, and then more sales can be achieved without pondering over the fluctuating market situations. MLM doesn’t need high start-up costs.

MLM companies will offer buy-backs of a significant part of the paid supplies; Pyramid Schemers, on the other hand, asks for investment from the new entrants in the name of recruitment fee.

In Pyramid scheme[1], the primary focus is on the recruitment process for fast profits rather than selling goods and services. This difference can help determine the company’s character, whether it is an MLM or Pyramid Scheme. Pyramid Schemers offers’ the commission for recruiting new members. Unlike, multilevel marketing focuses more on creating a brand for company’s products in the market.

In the case of Suman Sehgal v Union of India, the power of ED personnel to probe cases of money laundering under Sections 48 & 49 of the PMLA was explained. The Hon’ble Court stated that the investigating body i.e. ED, has the authority to investigate specific cases and invoke section 37(3) of the INCOME TAX ACT in conducting specialised investigations.

In the case of T.T.V. Dinakaran v. Enforcement Officer of the Enforcement Directorate, the authorities are empowered to summon the accused for questioning and collect documents and information relevant to the case during the investigation. When authorities receive any information about the person related to the case, the investigating body may summon that person for more details; then investigation can be concluded.

As suspicion grew stronger over Amway’s business operations, Amway was recently investigated for operating a pyramid scheme and duping its customers and distributers under the appearance of direct selling MLM (Multilevel marketing). Amway sells Fast Moving Consumer Goods and uses a combination of direct selling and multi-level marketing.

In this case, ED alleges that the company’s overall focus is on adding members on the pretext of making them rich if they enrol themselves as a member for distribution and accused the company of running a multilevel marketing scam.

ED also alleges that major commissions are being received by the old members, which gives effect to the enormous rise in the price of the products.

The rules prohibit the direct selling of consumer products and promoting money circulations and pyramid schemes. These rules also make it illegal for direct sales organisation to change their agent registration fees.

The company conducting operations as MLM are always under the scanner of the Enforcement Directorate (ED) due to their business model often overlaps with pyramid schemes that reward commission for adding more participants as members into the business network without any significant sales. The direct sales industry has consistently grown well, despite many challenges. As job cuts are rising, people are looking for a more stable source of income as direct selling gives flexible work hours and opens avenues of additional income. There are growing challenges for the law enforcement agencies to plug these marketing strategies, which take advantage of the loopholes in the regulating laws.

A Guide to Drop Shipping In E-Comme...

With the ongoing frenzy in e-commerce[1] marketplace, Dropshipping is an ultimate guide to merc...

Senior citizens are the essence of any country and to protect their needs, many schemes are lau...