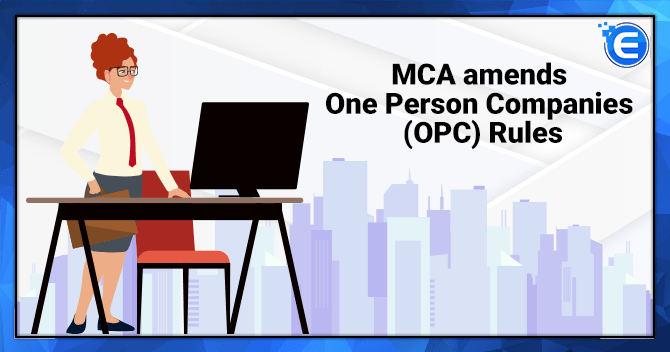 The Ministry of Corporate Affairs recently amended the One Person Companies Rules after the announcement was made in this regard by the Finance Minister. The MCA has amended the Companies Incorporation Rules 2014. The amendments to the rules governing One Person Companies will come into force from the 1st day of April. In this article, we shall look at the key changes brought in by this amendment.

What are One Person Companies, and how many such companies are there in India?

As per section 2 (62) of the Companies Act, 2013, One Person Company is a company which has only 1 person as part of its members. This type of company was introduced by the government to encourage self-employment opportunities.

As per the data compiled by the Monthly Information Bulletin on Corporate Sector, there were more than 34,000 one person companies out of the total number of about 1.3 million active companies in India. This record is as of 31st December 2020. The number of OPC was just over 2000 as on 31st March 2015 out of a total of about 1 million companies. Data also signifies that more than half of the OPCs are in business services.

What is the objective of amending the One Person Companies Rules?

MCA has stated the following objective behind amending the OPC Rules, and they are as follows:

With the above mentioned points in mind, the Ministry of Corporate Affairs has amended the OPCs Rules.

Key highlights of the amendment made in One Person Companies Rules

One person company shall alter its memorandum of association and articles of association by passing a resolution according to sub-section (3) of section 122 of the Act to give effect to the conversion and also to make necessary changes.

Change in thresholds of paid up capital and turnover

The Ministry of Corporate Affairs has revised the limit of paid-up capital and turnover of small companies under the Companies Act 2013[1].

Fast track process for mergers and amalgamations of start-ups

What are the benefits of reduction in compliance burden for companies?

Some of the benefits in such case are as under:

As stated at the beginning of this article, the amendments to the rules governing One Person Companies will come into force from the 1st day of April 2021. In her budget speech, Finance Minister Nirmala Sitharaman expressed that allowing OPCs to grow without any restrictions on paid-up capital and turnover will benefit start-ups and innovators.

Read our article:MCA Simplifies Winding up Rules for Small Firms

Recently, the MCA (Ministry of Corporate Affairs) has implemented new rules for the takeover of...

MCA Simplifies Winding up Rules for...

The Ministry of Corporate Affairs (MCA) on Tuesday notified rules for winding up of companies....