Companies Amendment Bill 2020: Decriminalisation of Offences and other Key Features 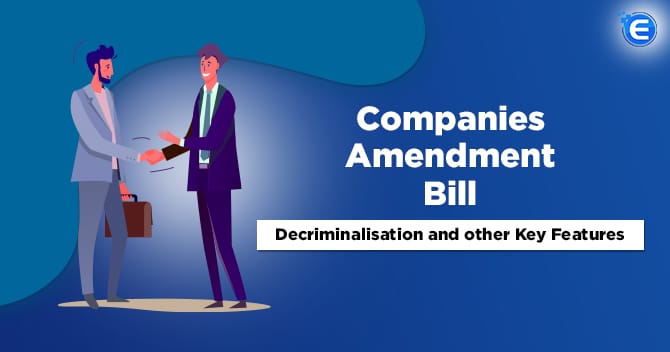 The Government of India introduced Companies Amendment Bill 2020 in Lok Sabha on 17th March 2020. Anurag Thakur, the Minister of State for Finance, introduced the bill in Lok Sabha to propose changes to the Companies Act, 2013. It proposes 72 changes from decriminalising various offences under the Act to allowing the direct overseas listing of Indian Companies. In this article, we shall throw light on the proposed amendments to the Act.

Amendments to the Companies Act, 2013 appears to be a routine exercise for the government. The Act has now been amended numerous times. However, the objective of these amendments is different. The government had constituted the Company Law Committee (CLC) on 18th September 2019 with an objective to promote ease of living to the corporates. The committee has also intended to decriminalise some offences under the Act based on their gravity and to take other important measures to facilitate the ease of living for the corporates in the country. The CLC submitted its report in November 2019.

Objectives of the Companies Amendment Bill, 2020

Following are the objectives of the Companies Amendment Bill 2020:

Decriminalisation of Offences under the Companies Amendment Bill 2020

In Company Law, there are numerous sections that lead to criminality and serious penalties of imprisonment. The Finance Minister had stated that the government would amend the Companies Act to remove the criminality clause on tax issues. The Finance Minister further said that the government does not want a law that would treat every business house with suspicion. Therefore the Companies Amendment Bill 2020 seeks to decriminalise certain offences under the Act, in case of defaults, which can be determined objectively and which lacks any element of fraud or doesn’t involve larger public interest.

The bill seeks to decriminalise minor procedural lapses or technical lapses into civil wrong. The bill, considering the pendency of the courts, proposes to adopt a principle-based approach to remove criminality in case of defaults. Out of the overall amendments proposed in the Companies Amendment Bill, approximately 45 amendments are related to the omission of penalties/imprisonment, the substitution of imprisonment with a penalty. Let’s look at few of those-

The above-mentioned amendments are proposed in order to remove the punishment of imprisonment on certain offences to facilitate the ease of doing business in India. Apart from these, there are some other clauses of the bill that reduces the monetary penalties and commutes imprisonment of offences. For 11 kinds of offences, the provision of imprisonment shall be removed. It shall limit punishments to fines only. Six kinds of offences that had already been decriminalised will see a further reduction in the quantum of penalties.

The salient features of the Companies Amendment Bill, 2020 are specified below:

The amendments in the bill are expected to considerably enhance the faith of Indian corporate in the government’s resolve to facilitate greater ease of doing business and provide great respect to law-abiding wealth creators in the country thereby reducing the burden on the judicial system. The MCA ministry of corporate affairs had mentioned that the priority is to remove sections that criminalise offences having no malafide intent. Hopefully, the intended changes in the Act will make the process of doing business efficient and smoother.