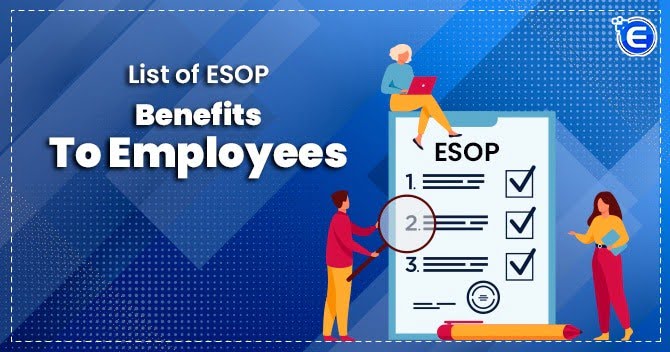 The main reason why an organisation devises an Employee Stock Option (ESOP) plan is to incentivise the employee of the company to perform better. A scheme of an ESOP is designed in such a way that the employee has to stay with the organisation for a certain period before he is able to enjoy the ESOP benefits accruing from such ESOP scheme.

Employee Stock Options[1] or popularly called as ESOPs, is actually a scheme where the company extends a portion of its shareholding to its senior employees, officers with a view to retain them for longer periods of time. In ESOPs, the company does not straightaway give the shareholding to the employees. Instead it vests a right in them that on a future date, the employees will have an option to purchase the shares of the company at a lower price than market value.

What are the ESOP benefits in case of employees of a company?

The following ESOP benefits can be claimed by an employee:

The employees also wish for future sustainability of the company especially during times of crisis like covid in 2020. It was witnessed during the covid that many employees at private and publicly owned companies experience much higher rates of lay-offs compared to those companies which provided ESOPs to their employees. The reason behind such fewer lay-offs is that the employers of the companies who provide ESOPs to their employees will have to pay a severance pay at the time of their termination. Therefore, companies where ESOPs are provided have a stronger company culture that helps the business sail through tough times.

From the viewpoint of an employee, ESOP acts as a reward for the efforts made by the employee for a company over a long period of time. The prospective ESOP benefits also link the financial interests of the employee in the success of the company which means that the employees ESOP benefits stands to gain if the company performs better. Mostly, employees work at a lower salary from the market standards and thus take the risks associated with the business. Hence, they should be handsomely rewarded in lieu of the risks taken by them if the business performs better in future.

The article speaks about the complete list of annual compliance calendar for listed companies f...

A number of companies have been employing a technique in vogue these days of retaining their hi...

With a view to incentivise employees to work better for the company and also to retain the best...