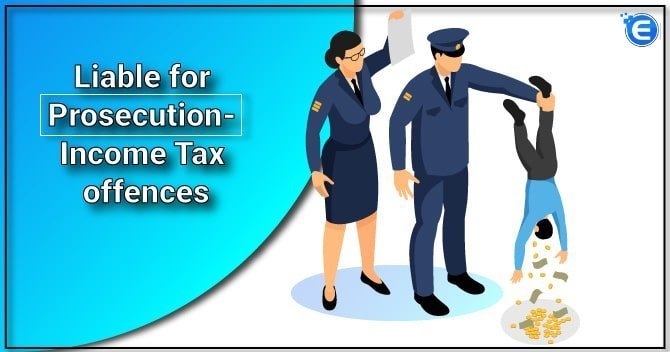 The penalties are incurred due to the default of the taxpayer. There are many activities that can further attract the prosecution under the Income Tax act. Generally, there are three modules build for the fiscal legislation for promoting the tax compliance including: (1) Charging Interest (2) Penalty imposition (3) prosecution against tax delinquents. However, the charge of interest is only compensatory in nature and on the other side penalty and the process of prosecution work as strong deterrents against probable tax delinquents.

To fight against the severe tax offences such as tax evasion, the obligation of the economic penalty will be enough and shall not fulfill the purpose. If tax evaders knew the fact that they can evade just by paying penalty in the year, then they would find this more profitable. However, the consequence of landing in jail is a more severe consequence and works as a better prevention. Moreover, some of the most serious defaults attract prosecution against the offender.

The following offences are punishable under income tax act:

Under section 132 of the Income Tax act[1], the authorities have the power to initiate the search proceeding at the taxpayer premises. During the entire process, the income tax authorities have the right to seize, bullion, money, jewellery or other valuable items. Generally, the items are seized by the tax authorities but in certain circumstances, it is not possible to take taken physical possession due to many reasons such as volume, size, and weight. In such cases, the authorities seize the assets by keeping that asset at the taxpayer’s place. The order will be issued on the owner that he shall not remove any items which has been seized. Contravening the order shall attract prosecution.

Transfer, concealment, removal or delivery of property to prevent tax

Income tax offence due to failure by the liquidator

According to section 178(1) any person who is a liquidator of any company being wound up by the order of the court or has been appointed as the receiver of any assets of the organisation, shall, in thirty days after the become liquidator must give notice to the income tax authorities. Failure to give notice of his appointment or in failure to set apart the sums notified by the Assessing Officer in contravention of income tax provisions.

Income tax offence due to failure to pay TDS or DDT

If any individual is unable to pay the credit of the central government such as a tax deducted by him (i.e. TDS), a dividend distribution tax (DDT), and any tax in respect of winning from crossword puzzle or lottery, then such individual shall be punishable with severe imprisonment and also a fine as prescribed under the section.

According to section 206C, if any individual falls short to pay taxes collected by him to further credit it to the government account, then an individual’s can be prosecuted as per the prescribed section under the Act.

Income tax offence by the way of evading tax, interest or the penalty

If any individual rebelliously attempts to escape from his tax liability interest or penalty or to report his revenue, then he will be liable to be prosecuted under as per section 276BB.

Income tax offence due to not furnishing return of Income

If an individual makes a wilful default in providing the return of income u/s 139(1) or a reply to the notice u/s 142(1) (i) then an individual must be prosecuted under section 276CC.

If the tax payer makes a statement which is false in any verification under the income tax act or rules and also any false information which the person knows is false or believes to know that it is false then the person shall be prosecuted under section 277.

Income tax offence in case of a company

Where the income tax offence is been committed by the company, then all the members, who at the time when the offence was committed will be responsible.

Under section 278C, if the offence related to income tax is committed by a Hindu Undivided Family (HUF), the individuals who will be guilty of the offence will be the Karta of the family. Provided that the Karta will not be held liable if he proves that the particular offence was committed without his knowledge.

There are various activities that only attract penalties but some severe crimes such as tax evasion attracts the prosecution under the Income Tax act. The taxpayers should timely fulfill their tax liability and comply with all the above discussed conditions in order to be protected from the penalties or the prosecution under income tax act.

To encourage the growth of the nation, the Union Budget 2019 Highlights was designed to boost t...

Cash withdrawal of more than 1 Cror...

The Central government to reduce cash transactions and move one step forward towards the cash-l...

The Concept of Tax Evasion and Tax...

Every individual desires to pay a minimum amount in tax and there is nothing wrong with that as...