Everything you need to know about AUAs and KUAs 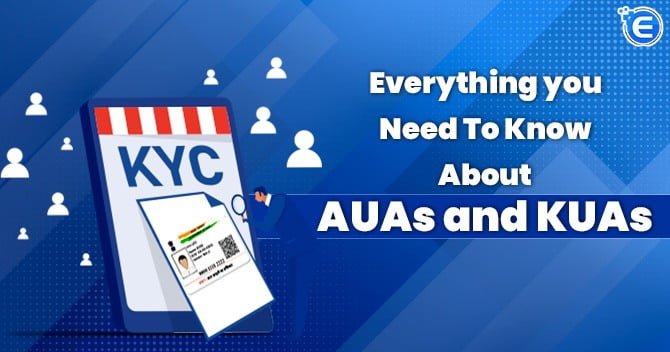 According to the provisions of Aadhaar Act, 2016, a requesting party could be a person or an agency that submits Aadhaar number and demographic information or biometric information of an individual to Central Identities Data Repository (CIDR) for the purposes of authentication. These requesting entities could be authentication user agency (AUAs), e-KYC User agency (KUAs). This piece of information talks about the meaning of AUAs and KUAs along with their requirements related to appointment and security.

What is an AUA?

An authentication user agency (AUA) is an entity which is engaged in the service of proving Aadhar Enabled Services to the Aadhaar number holders. These entities use authentication which is facilitated by the Authentication Service Agency (ASA). An AUA can be private/ public/ government legal agency which is registered in India which uses Aadhaar authentication services provided by Unique Identification Authority of India (UIDAI) and sends the authentication requests to enable its business/service functions.

Another question props up what are Sub AUAs?

Sub AUAs are agencies which use Aadhaar authentication to enable its services through an existing requesting entity.

What is meant by KUAs?

Before understanding the concept of KUAs, let us first understand the meaning of e-KYC Service Agency (KSA). KSAs are entities that are having connectivity with UIDAI’s Central Identity’s Data Repository (CIDR) and share the Demographic profile of Aadhaar Card holder to the KUAs for the purposes of authentication.

KUAs or e-KYC User Agency (KUA) is an entity which requires the authentication of Aadhaar card in terms of Biometric data of the Aadhaar Card holder from e-KYC Service Agency (KSA).

Both AUAs and KUAs are requesting entities which connect to the CIDR through an Authentication Service Agency (ASAs) [are those entities that have secured leased line connectivity with CIDR. ASAs transmit authentication requests to the CIDR on behalf of one or more than one AUAs. An ASA then enters into a formal contract with the UIDAI]. They either become an ASA on their own or by contracting services of an existing ASA.

What are the mandatory security requirements?

Read our Article:All you need to know about Payroll Compliances in HR in India

ESIC Return and other Annual Compli...

What are ESIC Return and other Annual Compliances? ESIC Return Employee State Insurance (ESI) i...

Compliance under POSH for Early-Sta...

Sexual harassment of women has always been a matter of concern for India, especially at the wor...