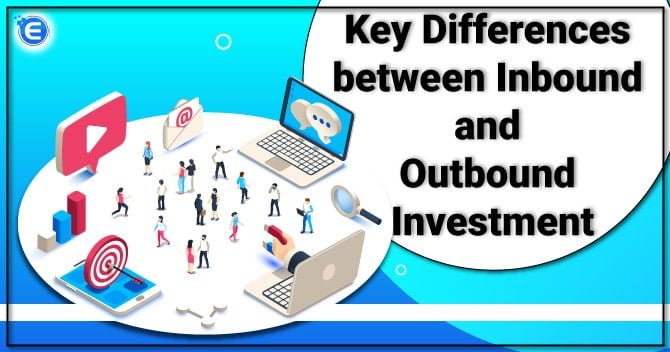 What is an inbound investment?

What is an outbound investment?

Regulation for Inbound and Outbound Investment

The primary regulatory authority for both these investment is the Reserve Bank of India (RBI). Through this central bank, different investors can carry out activities and transactions which involve inbound investment and outbound investment.

The government of India (GOI) brought out the Foreign Exchange Management Act, 1999 (FEMA) with a view to regulate foreign exchange transactions in India. Due to this act, the number of foreign exchange reserves in India increased.

Apart from this, the RBI through section 11 of the FEMA authorised specific institutions called authorised banks or authorised dealers to carry out transactions on behalf of companies that want to carry out the inbound and outbound investment.

There are specific modes to apply for making both forms of investment. An applicant would have to apply with the respective authority.

There are specific modes of making these forms of investment.

The following would be considered when making an inbound and outbound investment:

The following are the types of inbound investment which can be made by a foreign investor:

The above methods are used to make inbound investments in India. However, the government has regulated specific sectors and the amount of investment in each sector.  There are different routes for making such an investment.

The routes for investing are the following:

However, an outbound investment can be made in the form of overseas direct investment (ODI). An ODI is any form of direct investment in the shares or capital instruments of a foreign-owned wholly-owned subsidiary or any other form of entity.

Apart from this, individuals would also be allowed to make an outbound investment. An outbound investment through an individual can be made under the Liberalised Remittance Scheme[1] (LRS). This scheme is utilised for investing in maintenance and other forms of foreign expenditure outside India.