Who is Incompetent to Contract?﻿ 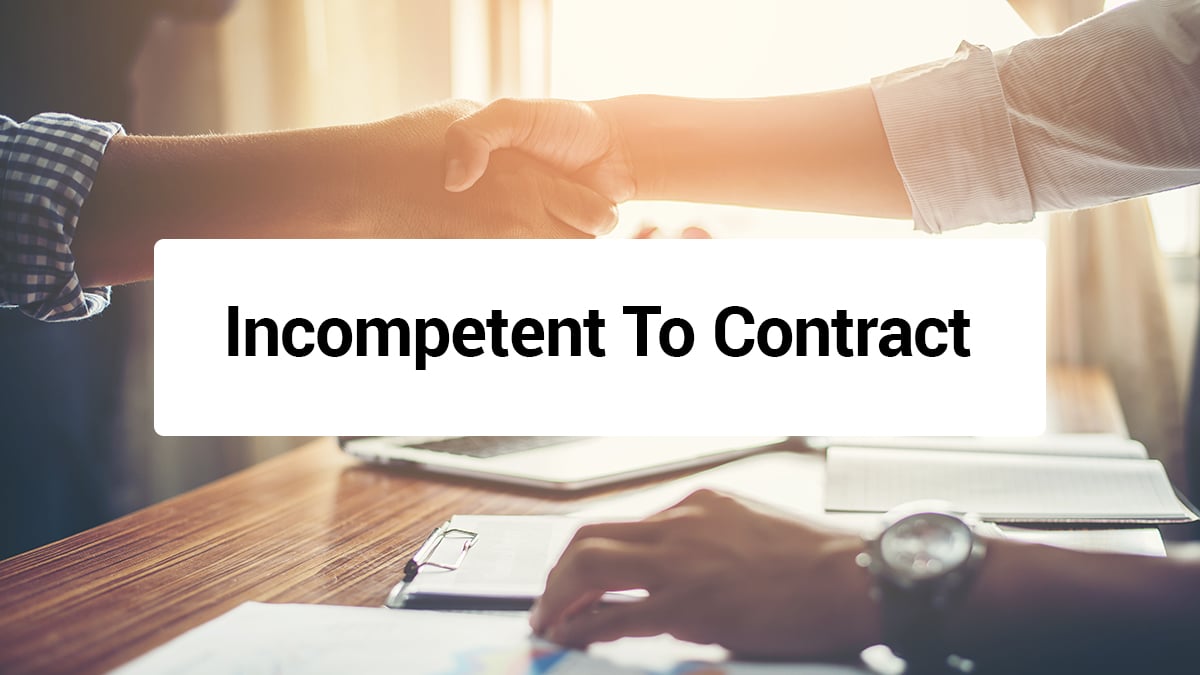 Earlier, doing business was easy, two people agreed and business started. But the recent developments have complicated the whole procedure of starting a business or a trade, making contracts an essential part of our businesses. Contracts hold an important place, outlining the rights, duties of the parties and the remedies in case of default. Because of the fact that this is so important, one needs to understand the basics of contracts, who are competent and incompetent to contract, because competency plays a key role in contract formation. In this we will discuss Who is Incompetent to Contract.

To get an understanding about people who have the capacity to contract and who are incompetent to contract lets first see the definition of Contracts. In simple terms, an agreement enforceable by law is a contract.

According to legal scholar Sir John William Salmond, a contract is “an agreement creating and defining the obligations between two or more parties”

Section 10 of The Indian Contract Act, 1872, states that all agreements are contracts if they fulfill the below criteria-

On closer look at the essentials, the most important one is related to the competency of parties, because if the parties are incompetent to contract, the contract will cease to exist.

Section 11 of the Indian Contract Act, 1872, states “when a person is said major, sound and not disqualified by law, then he is said to be competent to contract”.

So it is clear now, that the following persons are incompetent to contract-

In India, minors are incompetent to contract. So when a minor signs a contract, it is deemed void.

What will happen if a minor enters into an agreement?

An agreement entered by a minor is void ab initio. In Mohri bible v. Dhurmodas Ghose, the Court held that the law makes it essential that all the parties should be competent and it further stated that the Contract law in section 10 has mentioned that minors can’t enter into a contract.

A minor is usually incompetent to enter into a contract but he can be made beneficiaries to one. This has been inculcated in The Indian Partnership Act, 1932 which says that a minor cannot become partners in a partnership firm but they can enjoy the benefits accrued from it.

In cases, where the minor has falsely shown himself as major and entered into a contract, he can plead minority in defense and the rule of estoppels cannot be applied against him.

A minor’s contract by a guardian

In some cases, a guardian on behalf of a minor can enter into a valid contract for the benefit of the minor. However, the guardian cannot bind the minor by the contract to buy immovable property.

The position of a minor’s agreement and its effect-

Persons of unsound mind under Law

Following persons are said to be of unsound mind-

Disqualified persons are incompetent to contract

The disqualified persons are incompetent to contract due to many reasons like legal, political or corporate status.

For more information on this and assistance in drafting Contracts, you can contact our team of experts at Enterslice.

What do you mean by Cheque Truncati...

With an aim to fasten the cheque clearing process, Reserve Bank of India had brought the concep...