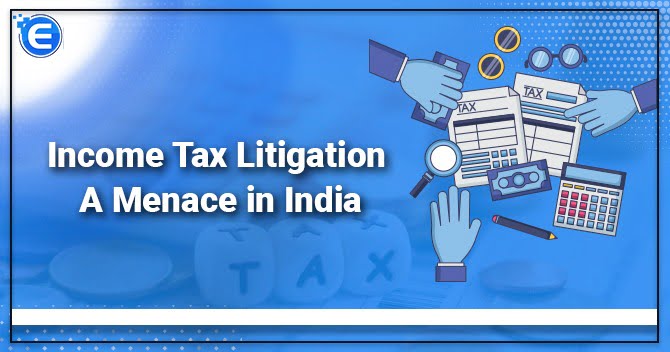 India has been ranked 63rd from 193 countries in 2020 for ease of doing business. This position has been reduced from 79th to 63rd for India. It reflects that our system has improved but the process and its administration of litigation has not changed. We are developing in terms of economy but, the path of litigation has been the same for us.

Income Tax Litigation plays a pivotal role in every economy’s growth. The ancient taxation system under the income tax act has been amended to a broader aspect. Recently, there have been changes in the legislation concerning indirect taxation like Vat and Service tax has been converted to One Single System of Taxation: GST.  However, the system of Direct Taxation on our income is ancient and, the substantive law has not been the same from the day of its enactment, including amendments done from time to time.

Though India Ranks below 100 for ease of doing business, however considering three main indicators for its calculations, it is above 100, which includes enforcing contracts (rank 163),  registering property (rank 154), and paying taxes (rank 115). It shows a weak business environment in India after looking at three indicators.

The quantum of litigation pending in India at the end of the financial year 2018-2019 is four lakhs seventy-eight thousand eight hundred one (4, 78,801) cases. The government has introduced a new bill in the Lok Sabha DIRECT TAX VIVAD SE VISHWAS BILL, 2020. The bill is the result of the menace caused by vexatious proceedings borne by the taxpayer.

Cases Pending In Each Court-

The total number of cases pending in the COURTS is as per the economic survey of 2017.

After the taxpayer receives an assessment order from the department, he can file an appeal with the Income-tax officer (assessing officer), then appeal to the Commissioner of Income Tax (CIT), and later to the Income Tax Appellate Tribunal (ITAT). This is the first step in the appeal process in the tribunal, and later High Court and Supreme Court are approached. The period for an appeal to be resolved is 8-12 years approximately.

Comparison of Taxation Structure of India V/S Other Countries

The Indian taxation system is compared with other countries for a better understanding of its implications—the comparison made with China, the USA, South Africa, and the UK.

The Indian taxation system is a three-tier system. The tax is collected from Central, State, and from Local Authorities like Municipal level. It comprises the income tax a substantive law backed by its Constitution from its Article 265.

Every law in India is backed by the legislation which is either passed by the Parliament or State Legislature. So, it is the case of the Taxation law. In India there are two types of taxation law indirect or direct taxation.

China is a communist country. China has a well-established taxation structure. Its economy is a macro economy and taxation is an essential element for its growth and success as a developed nation. There are largely 26 types of taxes in China, which are subdivided into eight categories.

Tax in the United Kingdom is levied at two levels that is, central and state. The taxation system is very flexible, easy to understand, and with the highest administrative efficiency.

Taxation in South Africa is levied at two levels: the central and local government. The revenue department of South Africa (SARS-SOUTH AFRICA REVENUE SERVICES) collects the taxes on behalf of the government.

Our GDP and Taxation

TAX- GDP Ratio[1] is used to measure nation development. Tax and GDP are directly proportional; more the GDP REFLECTS a higher amount of tax collection. It shows the overall development of the country and reflects higher per capita income.

The reason for the lowest GDP Ratio is due to poor administration of department. There are more events off tax evasions and frauds which lead to frivolous litigation.

On comparing India’s tax litigation system with the world, one can see several lacunas. Those shortcomings result from our inefficient administrative systems of appeal by the tax authority against a decision which has been given in favour of the taxpayer. This system of appeal is only allowed in India. If compared with the world, the order issued in favor of the taxpayer appeal by the tax administration is final. After this, only taxpayer is allowed to appeal to the higher authorities.

The government has introduced bill in 2020, DIRECT TAX VIVAD SE VISHWAS BILL for those pending disputes (4,83,000 cases) in appellate tribunal.

Read our article:File the Income Tax Refund with the Help of Experts

With a view to further digitize the interaction between the taxpayers and income tax authoritie...

With a view of reducing the amount of withdrawals in the private sector, the Central Government...