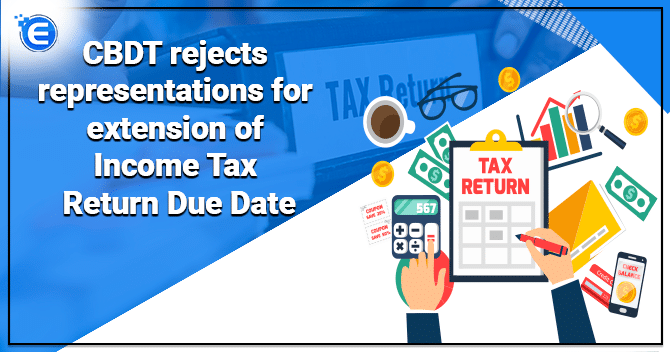 The Central Board of Direct Taxes stated that it shall not grant any further extensions for return filing where audit reports need to be filed. This order was passed in compliance with the Gujarat High Court directions that directed the finance ministry to look into the matter of extension of ITR due date. The court had passed an order on the All India Gujarat Federation of Tax Consultants petition. The body had made representation seeking an extension of due dates last year.

Due to the Covid-19 pandemic, the Income Tax Return Due date filing for the annual year 2020-21 was extended to 30th November 2020. Subsequently, the due dates for filing of returns were extended further to 31st January 2021. These were for cases in which a tax audit report is needed to be filed under the Income Tax Act and 31st December for all other cases.

Further, the above mentioned due dates were extended vide notification S.O 4805 (E) to 15th February and 10th January 2021, respectively.

The table made below summarizes the various due dates extensions provided-

Therefore it is quite clear that the government has been considering the representations of various stakeholders, and it has also been proactive in giving relaxation to the taxpayers by extending the due dates at regular intervals.

Comparing due dates extensions of India with other countries

If we consider and look at the relaxation of similar nature provided by other countries worldwide, we find that India has been very empathetic to the needs of the taxpayers when compared with other economies globally, stated CBDT.

No other country has extended the Income Tax Return Due date as much as India has extended. Countries that have been hit worse by Covid-19, such as the US, UK, etc., have been less lenient and have either provided no or lesser extensions in due dates.

The table displays that the government has analyzed the need of the hour and has been proactive in analyzing the situation and in providing relief. However, it must be appreciated filing of tax returns or audit reports is an essential obligation for the assessee. The High Court stated that it can’t be delayed indefinitely as the majority of the functions of the Income Tax Department commence once the returns are filed by the assessee.

Delay in filing of returns can affect tax collection and also other welfare functions of the state. The Central Board of Direct Taxes maintained that sufficient time had been provided to taxpayers file their income tax returns, and already many of them have filed.

The CBDT stressed the fact that already the Income Tax Return Due date has been extended thrice, and internationally the extension provided by India is more generous when compared with other countries globally. Moreover, as per return filing statistics of the current year, returns filed in the present financial year far exceed the returns filed, which were due on the last date of filing returns.

The CBDT believes that any further extension of due dates may adversely affect the return filing discipline and can also cause injustice to those who have filed the return well before time. It can further postpone the revenue collection, thereby hampering the government efforts to provide relief to the poor during times such as these.

Therefore, all the representations seeking further extension of the Income Tax Return Due date are rejected.

The Gujarat High Court upheld the above mentioned decision from the CBDT[1] but suggested that the policy making body can be lenient to late filings of tax audit reports.

The High Court stated that it won’t interfere in the executive decision making relating to deadlines. The court also noted that the Supreme Court has always held in the financial matters, judicial deference may be shown to executive pragmatism, and free play in the joints can be given to executive in fixing cut-off dates.

As per law, if taxpayers file return after the deadline that is January 10, then the taxpayer will be required to pay a late fee of 10000 rupees. Apart from this, taxpayers whose income is not more than 5 lakh rupees will be required to pay 1000 rupees as a late fee. By rejecting the representation for further extension of income tax return filing, the Ministry of Finance has also rejected all reports which predicted that the ITR due date will be moved further.

Read our article:Salaried? You need to file Income Tax Return!

While presenting her second Union Budget, the Hon’ble FM Nirmala Sitharaman unveiled a new in...

Tax Benefit on Home Loans as per Bu...

A home loan can help an individual in saving tax as per the provisions provided under the Incom...