GST on work contracts and implication in the Oil & Gas Sector 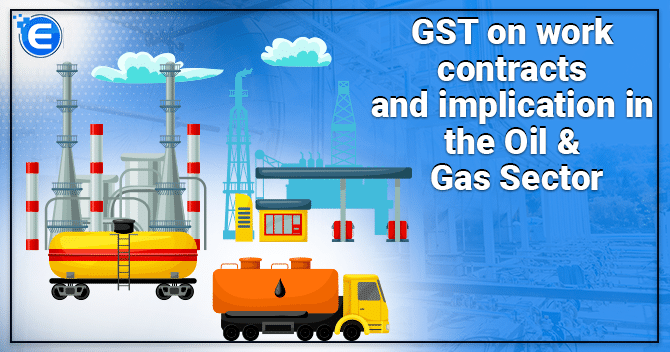 As per the 101st Amendment of the constitution in 2016 some of the goods were kept outside the purview of GST including High Speed Diesel Oil, Petroleum Crude, Motor Spirit, Natural gas, and Aviation Turbine Fuel. There are some other products including naphtha, kerosene, fuel oil LPG etc were included in the GST regime. In the GST regime, there are some indirect and direct impacts on GST on the oil and gas sector[1].

The Oil and Gas businesses engaged contractors for setting up of an offshore / onshore platform at the project stage. These contracts if entered as a single contract for the complete work are likely to be eligible as “Work Contract”, under GST.

The concept of Work Contract becomes highly relevant in the final two stages, which are Operations and Projects.   Oil and gas companies hire contractors for building up offshore and onshore platforms at the project stage. If these contracts commences as a single contract for the whole work, then they are most likely to qualify as “Work Contract”, under GST.

It is important to note that in the 22nd council meeting of the GST has provided that the GST rates are levied at the reduced rate of 12% on the work contracts with respect to oil and gas production and exploration.

At the initial stage, various kinds of contracts related to the annual maintenance are typically procured by the oil and gas companies; Annual Maintenance Contracts can succeed as pure service contracts only, when they engage in no supply of goods. If repair/ maintenance obligations are relevant to immovable property, including machinery which is rooted to earth in a way that makes it eligible as an “Immovable Property,” such Annual Maintenance Contracts are competent as “Work Contracts”.

The Central Government has authorized these Oil and Gas corporations to formulate their contracts with contractors such that they will come under the category of “Work Contracts”. They will take credit for the contribution applied to the above Services and goods through modus operandi prescribed by the Central Government.

There are three structures in Oil and gas companies:

This sector includes the activities such as searching for the potential under water or underground crude oil fields drilling and subsequently drilling and operating the wells that bring and recover crude oil to the surface of the ground.

The acquirement of the upstream oil companies is categorized under the below mentioned heads;

The oil companies engaged in activities such as drilling have expertise in searching for oil reserves underground. After that the Up-stream companies have to obtain various Capital Goods for setting up a platform for exploration and drilling of searched Crude Oil.

In the situation above, the output that is Oil and Natural Gas are kept outside the ambit of GST. However, the capital goods and requirements of procurements are kept under the GST.

This sector usually involves the shipping, (truck, barge, an oil tanker, pipeline or rail) wholesale marketing of refined or crude petroleum products, storage. The pipelines are very beneficial as they can be used to transport the oil from the exploration sites to various other depots. Further from the depots, as it gets transferred to the downstream distributors.

It is important to note that the midstream corporations are expanding a lot into an enterprise of pipelines and on their protection. Now if they are not occupied in the sale /purchase of Gas or crude, their services are calculated as “Pure Services”, and they are qualified for Input Tax Credit.

In the earlier regime of tax, when GST was not implemented, the midstream companies procure various capital goods and inputs for taking responsibility for building the pipeline effective system. Prior there was much litigation in court on the claim of input of excise duty paid on acquiring of the inputs in the construction of Pipelines with taxing establishment and in the GST regime also there is much litigation on this subject matter.

Also in the matter Jaypee Bela Plant Vs CCE, Bhopal (2007), it was held that the tubes and pipes constituting a pipeline which was used for the purpose of carrying water from the reservoir located 6 kilometers away from the factory is used for purpose of manufacturing finished products. Thus, we are eligible to apply the Mischief Rule of the statutory explanation to define “Pipelines laid outside the factory premises”, for permitting GST input.

It is commonly referred as the refinement of petroleum crude oil and processing of Liquefied natural gas/ raw natural gas as well as the distribution and marketing of any product received from natural and crude gases.

The companies use refineries, which further cleanse the Aviation fuel, HSD, manufacture refined petrol and petroleum crude., the main component of these companies are raw crude gases and raw crude oil, which are being kept outside the GST regime and on the other hand, the outputs are consist of non taxable as well as taxable products.

As we have seen from the above discussion that gas does not come under the ambit of GST hence, there is no input tax credit accessible. Furthermore, the downstream businesses are not able to claim the advantage of the tax credit of VAT paid on buying of natural gas which is obtainable for alternating feedstock /fuels.  If the natural gas is brought under GST, natural gas will draw a standardized rate of tax at the burning up point wherever in the country after doing away with current rates of VAT and excise duty. So, it is significant for the Union Government as well as consumers to bring Petroleum Products under the ambit of GST. This will lead to a cut of taxes on these products; eventually the end users will be benefited.

Read our article:Impact of GST on Solar and Renewable Energy

Chapter XX of the Central Goods and Service Tax Act, 2017 provides the provisions for Transitio...

GST Invoice, Debit and Credit Notes are discussed under Chapter VI of CGST rules, 2017. What is...