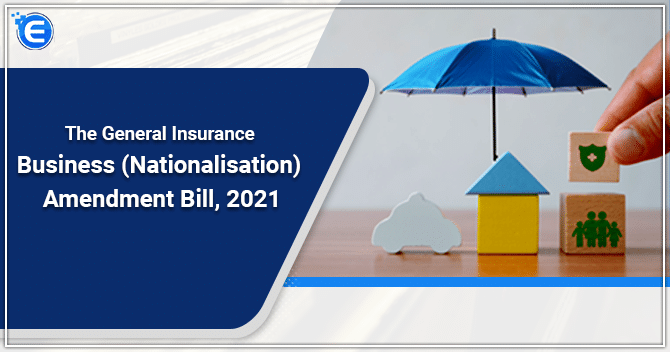 At the moment, there are 4 general insurance companies in the public sector. They are as follows:

It is yet to be recognised as to which of these companies the government will park its stake.

What is the definition of the General Insurance Business?

The bill has sought to present 3 main amendments. They are discussed below.

These amendments are as per the budget announcement when the Finance Minister announced that they sought to take up the privatization of two public sector banks and a General Insurance Company in 2021-22. She further said that it will need legislative amendments and proposed to introduce the amendments in the session itself.

What was the need for an amendment?

As per the government, the need for an amendment was due to the following reasons:

As per the data published by IBEF, India’s insurance penetration was seen at 3.76% in FY 20. In terms of insurance density, its overall density was seen at US$ 78 in FY 20. It stated that the market share of the private sector companies in the general and health insurance enhanced from 47.97% in FY 19 to 48.03% in FY 20.

What are the pros & cons of the General Insurance Business (Nationalisation) Amendment Bill, 2021?

The General Insurance Business (Nationalisation) Amendment Bill, 2021, has been passed in the parliament, and it amends the General Insurance Business (Nationalization) Act 1972, which was enacted to nationalize private companies undertaking general insurance business in India. As referred at the beginning of this blog, these amendments are in line with the budget announcement when the Finance Minister announced that they sought to take up the privatization of two public sector banks & a General Insurance Company in 2021-22.

Read our article:A Detailed Review of the IRDA Act 1999

FDI Requirements in Insurance Pre a...

The Hon’ble Finance Minister has increased the foreign investment and FDI requirements in ins...

Difference between Underwriter and...

This article focuses on the different roles of an Underwriter and Broker in Insurance. Insuranc...