A Detailed Review of the IRDA Act 1999 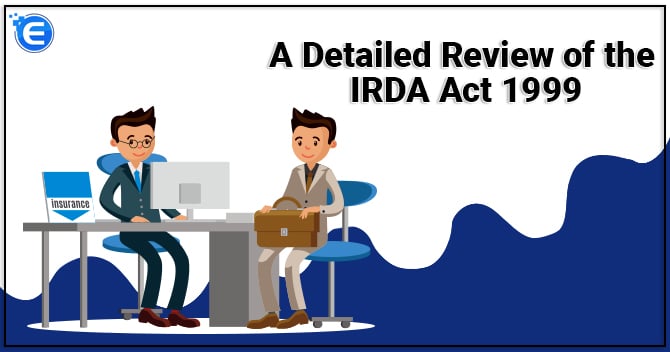 The Insurance Regulatory & Development Authority of India Act 1999 was passed by the parliament of India in December 1999, and it received the presidential assent in January 2000. The Act has been divided into various Chapters and further into multiple sections. Under the IRDA Act 1999, regulatory authority was established called IRDA, which replaced the Controller of Insurance under the Insurance Act of 1938. This article specifies some of the crucial provisions of the IRDA Act.

Establishment and Incorporation of the Authority

The IRDA Act 1999 provides for the establishment and incorporation of an authority called the “Insurance Regulatory and Development Authority”.

Some of the main features of this authority are as follows:

In 1994 Malhotra Committee recommends reforms after going through the insurance sector and getting inputs from the stakeholders. The key recommendations of this committee were that private sector companies should be permitted to promote insurance companies, and foreign promoters should also be permitted.

After that, in 1996, an interim body called the Insurance Regulatory Authority was set up, and finally, in 1999, the IRDA Act 1999 was enacted. The formation of the insurance regulatory and development authority as an autonomous regulatory body was done on 19th April 2000.

Composition of Authority (IRDA) as per IRDA Act 1999

As per the Act, the authority shall consist of the following members:

Tenure and Removal of Members

The tenure of the chairperson shall be 5 years, and he shall be eligible for reappointment until the age of 65 years. The appointment of members shall also be for 5 years however no person can hold office as a whole-time member after 62 years of age.

A member may be removed from the office by the Central Government if:

Administrative Powers of Chairperson according to IRDA Act 1999

The Chairperson shall have the power of general superintendence and direction regarding all administrative matters of the authority as per IRDA Act 1999.

All questions that are presented before any meeting of the authority shall be decided by the majority of votes of the members, and in case the votes are equal, then the chairperson, who presides over the meeting, will have a second or a casting vote.

The assets of Interim Insurance Regulatory Authority shall include all rights, powers, properties (whether moveable or immovable), including cash balances, deposits and all other interests and rights in such properties as in possession of the Interim Insurance Regulatory Authority. All books of account and other documents pertaining to it and liabilities would be deemed to include debts, liabilities and obligations of whatever kind.

Duties, Powers and Functions of the Authority

Chapter IV of the IRDA Act 1999 lays down the duties, powers and functions of the Authority. The primary duty of the authority is to regulate, promote and ensure the orderly growth of the insurance business and re-insurance business.

Further powers and functions of the authority are as follows:

Accounts and Audit under IRDA Act 1999

The authority is required to maintain the proper accounts and such other records and also prepare annual accounts statements in a manner prescribed by the Central Government in consultation with the CAG of India.

Further, the accounts of the authority have to be audited by the CAG of India at intervals specified by him and expenses incurred related to such audit, has to be paid by the authority to the CAG.

The CAG of India and person appointed by him relating to audit of the accounts of the authority must have the same rights, privileges and authority in connection with such audit as the CAG generally has in connection with the audit of the government accounts and will possess the right to demand production of books of accounts and other documents and papers to inspect any of the offices of Authority.

The authority’s accounts certified by the CAG of India shall be forwarded to the central government annually, and such government must lay it before each House of the Parliament.

The authority can make regulations consistent with this Act in consultation with the insurance advisory committee by notification.

Such regulations may provide for all or any of the following matters:

Miscellaneous Provisions of the IRDA Act 1999

You can understand and go through all the Acts and Amendments in respect of Insurance by visiting this link- https://www.irdai.gov.in/ADMINCMS/cms/frmGeneral_NoYearList.aspx?DF=ACT&mid=4.1

The main aim behind enacting the IRDA Act 1999 was to create a regulator that will regulate & develop the insurance sector in the nation. It was envisaged to control all individuals/organizations that are directly or indirectly interconnected with the insurance sector in India. This Act has sought to cover all the aspects related to insurance and has set out the rules and regulations governing the Insurance Regulatory and Development Authority. The authority has been bestowed with incredible powers, however, it doesn’t mean that the authority reigns above all, it is accountable to the Central Government. For more information on the authority, you may visit https://www.irdai.gov.in/

Read our article:What are the functions of IRDA?

Amidst the growing implications of the Covid-19 pandemic, the IRDAI has issued guidelines direc...

The article envisages about, IRDAI norms related to Insurance Surveyors and Loss Assessors. The...

How you can file a case with Insura...

The Insurance Regulatory and Authority of India have set up a procedure for insurance companies...