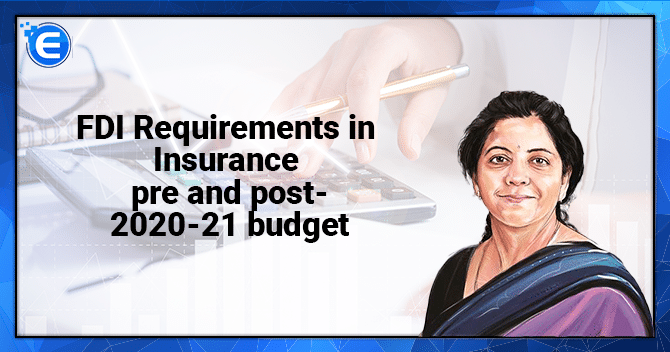 The Hon’ble Finance Minister has increased the foreign investment and FDI requirements in insurance companies. This is a much-awaited development which will help the Indian insurance sector achieve tremendous growth through vast capital pools.

Uptil 2015, foreign investment in the insurance sector under the automatic route (i.e., without Government approval) was capped at 26%. In the year 2015, the government permitted Indian insurance companies to have up around 49% foreign investment, with the caveat that the companies remain ‘Indian owned and controlled. The condition has been deterrent for several prominent global insurers from setting up a business in India.

Under a new proposal, foreign ownership and control of Indian insurers will also be permitted with some ‘safeguards.’ The safeguards proposed in budget appeared to be reasonable and include requirements such as the majority of board of directors. The key management persons of the insurance company comprising of Indian residents that of 50% of the board composition must comprise of the independent directors. Further, it has to ensure that sufficient capital is retained in an insurance company’s books. Foreign-owned insurers will be required to hold a specified percentage of profits as ‘general reserves.’

The detailed rules and regulations regarding the implementation of the increased FDI requirements in insurance and additional safeguards shall be formulated by the Ministry of Finance and the sectoral regulator – (IRDAI)[1] Insurance Regulatory and Development Authority of India. The MoF and IRDAI must be required to play a balancing act – on the one hand, to protect any long-term interests of Indian policyholders and ensure stability in the insurance sector. However on the other side they should ensure that these regulations are not for foreign investors so as to discourage them from expanding the presence in India.

The previous increase in FDI requirements in insurance sector was accompanied by the ‘Indian Ownership & Control’ guidelines. The sector witnessed limited foreign investors increasing the stake from 26% to 49%. Likewise, the increase in foreign investment limits in insurance intermediaries from last year was coupled with stringent conditions, such as requiring IRDAI approval to repatriate dividends and imposition of thresholds transactions with related parties. In the budget speech, insurers have been allowed to have foreign ownership and control. We also expect some of the earlier regulatory overhauls that have withheld from the sector from achieving its full potential that has come to an end.

The Indian insurance sector is open to private players for almost two decades, which is fairly underdeveloped compared to other large economies with the low insurance penetration. The increase in FDI requirements in insurance shall help the sector expand and service many more Indians. The 49% foreign investment cap has been preventing the foreign shareholder from infusing capital without an Indian partner participating in a capital raise.

The RBI has also recently proposed to cap the investments of banks in insurance companies in order to isolate from risks emanating from the non-core businesses, including insurance. The announcement is well-timed as foreign investors that will be a viable substitute for insurance companies promoted by banks.

In a past decade, no new life insurance company has been set up, and only the handful of general insurance company have been incorporated. Insurance is the capital-intensive business and requires long-term investment from the promoters to ensure compliance with IRDAI’s solvency requirements. With this change existing foreign investors would increase their stakes in insurance JVs. Several foreign insurers shall be encouraged to set up shop in India as they will now get a say in a day-to-day affairs and policy decisions the insurer.

Non-life insurance companies have also welcomed the proposed amendment regarding the allowability of deduction for unpaid statutory liabilities under section 43B of ITA in the year of payment. Another positive thing for the FDI requirements in insurance sector is that the government will divest its holding in India’s Life Insurance Corporation (LIC) through an initial public offer and unlock value for investors. However, the negative impact of the Budget on the life insurance sector may harm LIC’s valuation.

The insurance sector must truly achieve its potential, Indian insurers will need to rely upon foreign partners’ capital and technical know-how to scale-up. More technical products have to be offered in this sector. We want and expect that this newly found tail-wind of foreign capital and access to know-how will usher a new growth era in an insurance sector.

A Detailed Review of the IRDA Act 1...

The Insurance Regulatory & Development Authority of India Act 1999 was passed by the parlia...

What are the functions of IRDA?...