FSSAI: Decides to Food Map the classifications under the FSS Act with HS Code 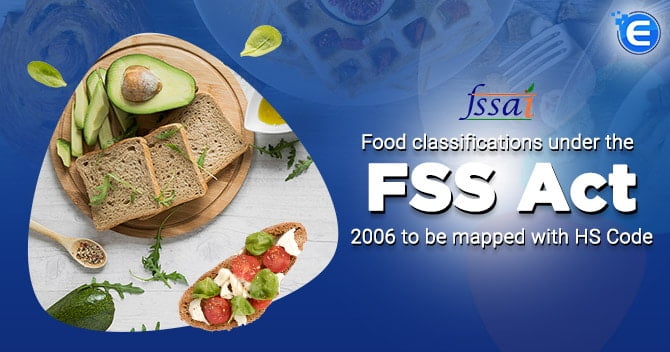 India’s apex food regulator, FSSAI (Food Safety Standards Authority of India) has decided to Food Map classifications mentioned under the FSS Act, 2006 (Food Safety and Standards Act, 2006) with those of the HS (Harmonized System) code. The Concept of Food Mapping means a process where all the food products are classified and categorized to some custom codes, which are known as the HS codes. The main aim of this attempt was to confirm the uniformity of the enforcement activity for both the domestic and imported food products. As earlier, the classification of HS codes existed only for the food products mentioned in the import category.

The Food Safety Standards Authority of India (FSSAI) is an autonomous body formulated under the Ministry of Health and Family Welfare, Government of India. This authority is being regulated and administered by the FSS Act, 2006, and is responsible for promoting and protecting public health by regulating and supervising food safety. Moreover, this authority is responsible for laying down the science-based standards for the food articles. Further, it also regulates their manufacture, sale, import etc. to ensure that safe, quality and wholesome food is available for human consumption.

According to Ms Rita Teotia, chairperson of the Food Safety Standards Authority of India (FSSAI), the process of food mapping would make sure uniform testing protocols for both the imported and domestic food products. This will directly or indirectly result in creating accord between the enforcement activities for the two sectors and will also strengthen the food safety ecosystem in a holistic manner.

Further, Ms Rita Teotia, stated that FSSAI is ensuring that not even a single food product goes out of their reach for human consumption without undergoing proper check and inspection. So, to ensure public safety, FSSAI has decided to map its products by classifying and categorizing them to some custom codes which are called as HS (Harmonized System) code.

Lastly, she said that, after the completion of the process of common codification, the process of testing and sampling would become absolutely standardized for both the Imported and Domestic Products.

Why is there a need to classify Food Products in HS Codes?

Ms Rita Teotia, chairperson of the Food Safety Standards Authority of India (FSSAI), on the occasion of inauguration of North India, Regional office of the FSSAI in Ghaziabad, stated that, under the Food Safety and Standards (FSS) Act, 2006 there is a specific prescribed classification of the food products; while on the other hand, the global food industry is governed and regulated by the classification under the HS (Harmonized System) Code, product by product. Further, this HS Code acts as a universal nomenclature and is classified by the International Customs Council (ICC). To line up with the global classification of HS Codes, FSSAI has decided to change its product classification to HS Codes for both the domestic and import products. Furthermore, according to the guidelines issued by the WTO (World Trade Organization), there was a need for FSSAI to issue an identical regime for both the domestic and imported products.

In my opinion, the decision of substituting the existing food classification into HS code will not only result in lining up the Indian food industry with the global standards but will also ensure that the food served for human consumption is safe, up to mark and has undergone proper check and verification. Also, by means of this system, the process of testing and sampling would become absolutely standardized for both domestic and imported food products.

Also, Read: How to Apply for Basic FSSAI Registration.

How can a food dealer obtain FSSAI...

Overview The Food Safety and Standards Authority of India established under the Government of I...

Unexpected things are bound to come up, so do yourself the favour of checking applicable FSSAI...

What is FSSAI Guidelines for Labeli...

Before the product is introduced in the market, it is required to get the FSSAI product approva...