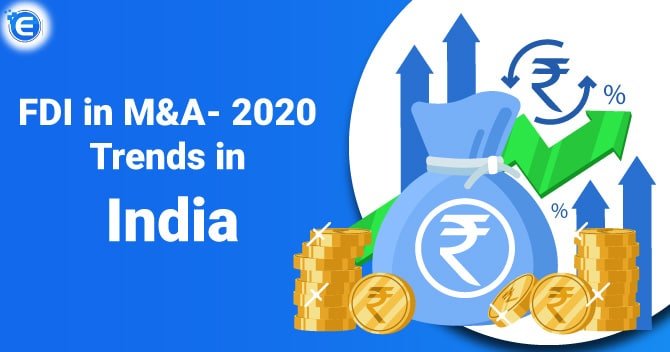 Foreign Direct Investment is understood as any form of direct and indirect investment from a foreign entity or a non-resident Indian. This investment can be in the form of purchase or acquisition of shares in an Indian company or an Indian entity. However, the foreign direct investment can also come in the form of a foreign company investing in an Indian company or acquiring minority or a majority stake in the Indian entity. FDI in M&A sector is one of the key requirements for the Gross Domestic Product (GDP) to improve.

Overview of FDI in M&A sector

Since 1991, this sector would not have been active due to strict policies and enforcement under the Monopolistic and Trade Practices Act (MRTP Act), 1969. However, the Indian government paved the way to the development of the finance bill in 1991, which brought about major reforms for the FDI sector. Due to this, gates were open to foreign companies to invest in the Indian M&A space. These revolutions brought about major developments in India.

Not only did technical advancements occur in India, but it also paved the way of creating more amount of employment opportunities amongst individuals in India. These policy reforms also improved the way in which the country operated.

In the millennium, there was a steady growth of FDI in M&A sector; however, this was not about to improve as there were a lot of regulatory problems in these areas. Some of the problems included the lack of liberal policies brought out in India. Apart from this, there were several restrictions.

Restrictions on FDI in M&A sector before 2010

There were many restrictions in 2000 which did not allow a lot of inflow of FDI in M&A sector. The following are the reasons which caused less FDI inflow in the M&A sector:

These routes are considered as the following:

Government Control- The ruling party in India before 2010 has stringent policies. No form of liberation was given for FDI in M&A sector during this time. Due to this, there was a lack of development and regulation in this sector.

Situations which increased the amount of FDI in M&A Sector

In 2019, India surpassed the United Kingdom for having one of the largest GDP in the world. However, the global pandemic caused by the Covid-19 has disrupted the GDP and growth of FDI in India.

The following reasons have increased the amount of FDI in M&A sector:

Present Standing of FDI in M&A

The major reasons for such ranking would be predominately based on the following:

What initiatives have been brought by the Government of India to boost FDI in M&A?

Foreign companies such as Google have invested USD 10 Billion for the development of technology and AI in India. Similarly, tech giants such as Amazon have provided assurance to the government of India for setting up technology hubs and increasing the amount of technology in India. Apple has shifted its production hubs from China to India.

Amidst the effects taken by the Chinese Government to tackle the Covid-19 and the political scenario throughout the world, India has taken global stance in being a leader of production. To improve the amount of FDI in M&A, the government has come out with different schemes.

Some of these initiatives which have improved the amount of FDI in M&A sector are:

The Best Advice for Mergers &...