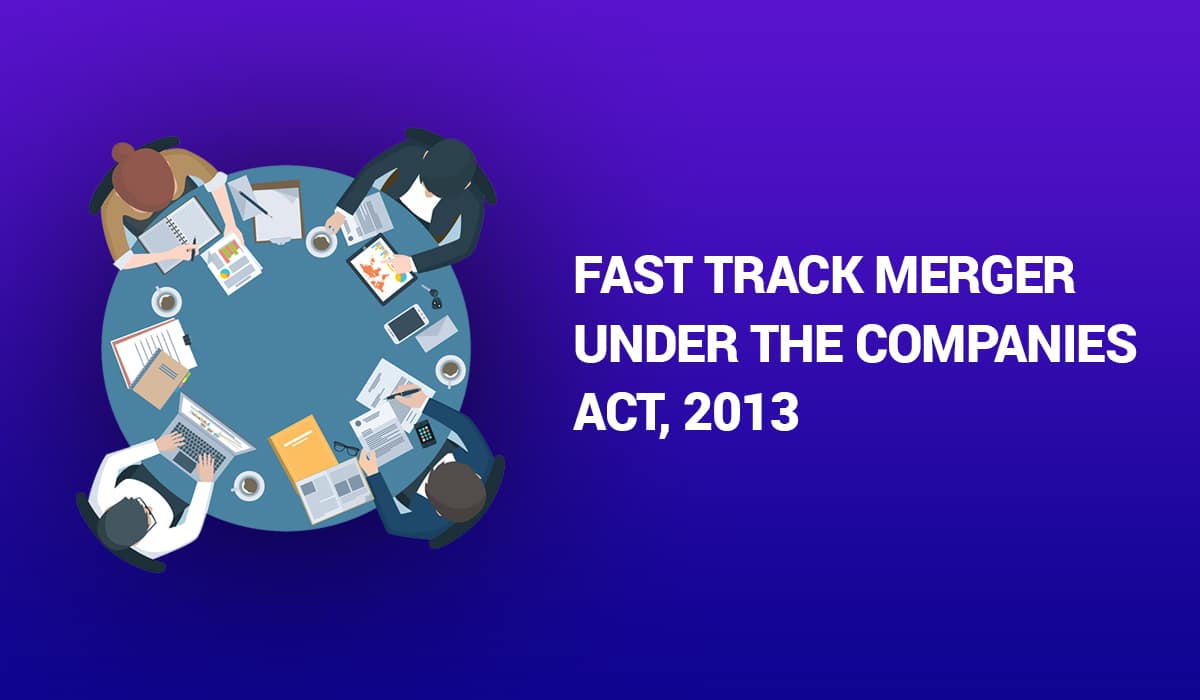 To develop the value generation, market share and cost-efficiency of businesses, companies time and again direct themselves to mergers and acquisitions. Typically, Mergers and Acquisitions have various advantages and have proven its worth in many complicated situations in the past. But, the Companies Act, 2013 of India involved separate provisions and monotonous procedures to deal with them. Further they also require approval from many regulatory bodies as well as Central Government and direction. In consideration to same, there was a sincere demand for years to both make things comfortable as well as speed up the procedure related to it which result in introduction of Fast Track Merger.

On 15th December 2016, the Ministry of Corporate Affairs (MCA) notified a novel and a welcome thought of ‘Fast Track Merger’ by introducing Section 233 of Companies Act, 2013.

What is a Fast Track Merger?

Fast Track Merger provides a more straightforward procedure for the amalgamation of certain classes of companies which includes small companies, holding and subsidiary companies. Hence, under this concept, a merger or amalgamation can be entered into between:

Before moving ahead, lets get familiar with few terms:

Fast Track Merger is a new concept which is introduced in India under the Companies Act, 2013. Moreover, fast Track Merger is a unique concept as it does not require approval from National Company Law Tribunal (NCLT) for the merger. Hence, approval by jurisdictional Regional Directors based on the reports by the Registrar of Companies (ROC) and Official Liquidator is sufficient.

Also, Section 233 of the Companies Act, 2013 and Rule 25 of Companies (Compromises, Arrangements and Amalgamations) Rules, 2016 deals with the concept of Fast Track Merger.

What are the steps involved in the Fast Track Merger?

1. Get the approval of the draft scheme

2. In addition, Authorize a director or a company secretary or any other person to do such acts in this regard

3. Arrange statement of Assets and Liabilities of the Companies disclosing the current position of Companies and receive the Auditor’s Report.

1. Issue notice of the proposed scheme inviting objections/suggestions, from jurisdictional Registrar of Companies (ROC) and to the persons affected by the scheme within 30 days.

2. Also, Each company needs to file their respective Declaration of Solvency Statement (Form CAA-10) with the ROC.

3. The notice for the meeting must be sent before 21 clear days to the members. It must state the copy of proposed scheme, a statement disclosing details of the merger, copy of the latest audited financial statement, valuation report

What would be the post effects of approval of the Fast Track scheme?

The post effects of the approval of this scheme are as follows:

The Companies Act, 2013 by introducing fast track merger has simplified the procedure for mergers and amalgamations of a particular class of companies such as holding and subsidiary, and small companies. Hence, fast track merger is a welcome move. Earlier, the Companies Act, 1956 does not offer a simple process for such alliances. Also, all such restructuring have to follow a time-consuming and challenging process as any other mergers or amalgamations. Hence, there was a great need to shorten and fast track the procedure for mergers of such companies where interests of third parties are not involved.

Due Diligence, Mergers and Acquisitions
Sep 02, 2021

In recent decades, the AI in M&A Due Diligence market has been on an increasing slope. Due...