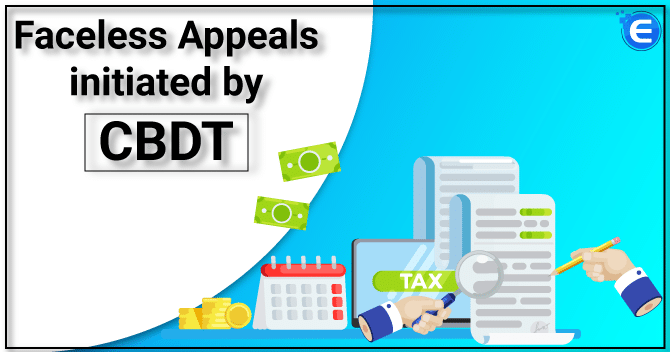 The Income tax Department of India has initiated a new method relating to filing of an appeal, the Faceless Income Tax Appeals. Under this method of the faceless appeals, all the appeals related to the Income tax will be conducted and will be settled up in a faceless manner. Provided that all the appeals which are relating to the major tax evasion, serious frauds, serious and sensitive matter, and all the matters which are dealing in the Black Money act and International tax act shall not come under the ambit of this method of faceless appeal.

The purpose behind faceless appeals

This new platform of the faceless appeal will further ensure the transparency in the tax environment by removing all the physical hindrances between the taxpayers and the tax authorities and facilitating the users to contest any tax claim without the issue of any personal interaction with the authorities. This method will further facilitate taxpayers to make their arguments and submissions from the comfort of their homes and enable them to save their valuable resources and time. It is important to note that all the income tax will appeal will be finalized in a faceless manner with some exemptions such as the appeals relating to tax evasions, serious frauds, etc.

From the 25th of September, all the income tax appeals, everything from e-communication of notice/e- verification/questionnaire, e-allocation of appeal, e-enquiry to e-hearing and at last the e-communication of the appellate order, the whole process of the appeal will be shifted to the online medium of faceless appeal, without any the need for any physical interference between the department and the appellant. This will further help to eradicate any physical interface between the income tax department[1] and the taxpayer or their council. The taxpayers have the privilege to make submissions from their respective locations and save both, time and money.

Under this method of Faceless Scrutiny Assessment, one specific computer picks the different tax returns for the inspection, based on the risk mismatch, parameters and then afterwards allots the specific case to a particular team of officers. The board further stated that the faceless appeals will assign the cases through the method of Artificial Intelligence (AI) and data analytics under the central issuance of notices and dynamic jurisdiction would have Document Identification Number (DIN).

This allocation is done by the computer and been reviewed by the officers at an alternative randomly selected position, and after than only if agreed, a notice is been sent to the unified computer system. All the selected notices are required to be responded automatically, without the need of physically meeting any official or visiting a tax office.

Benefits of the faceless appeals

It will provide great convenience to the tax payer and further, it will ensure fair and just appeals in order to reduce the litigation processes. This new system of the faceless appeal will be contributing to delivering greater accountability, transparency and increasing the efficiency in the working of the Income tax department.

As per the data of the Central Board of Direct tax (CBDT), till date, there are almost 4.6 lakh pending appeals before the Commissioner of Income Tax (appeals) in the tax department. Out of this, around 4 lakh appeals or 88% will be handled under the mechanism of the appeals and further, almost 85% of commissioners will be employed only for disposing of the cases under this mechanism of the appeals.

At last, it is one of the major reforms which have been introduced by the Income Tax of India; the Central Board of Direct Taxes (CBDT) has launched the system of faceless income tax appeals, where all the upcoming appeals which are bought in front of income tax commissioner shall be resolved only by the medium of e-mails, e-hearings, e-enquiries. As there are more than 4.6 lakh pending appeals before the Income tax commissioner, so this is a crucial step taken by the Central Government to bring out the system related to faceless appeals.

Tax on Distributed Profit of Domest...