Development of Open Banking in India 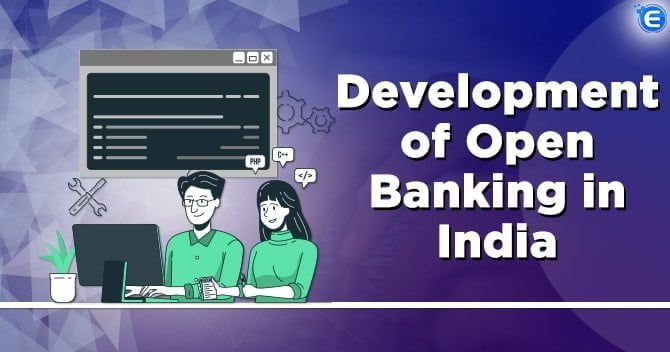 The banking industry has been witnessing a number of changes from the last few years and especially with the emergence of new players like Fintech and Neobanking. One can add open banking to this list. The development of open banking in India is expected to bring in a massive change in banking.

What is Open Banking?

It is a banking practice that provides open access to third-party financial service providers to consumer banking, transaction, and other financial data from banks and non-banking financial institutions via a data-sharing model called Application Programming Interface (API).

The evolving spectacle of open banking in India and globally

The European lawmakers implemented a Revised Payment Service Directive in 2015. It allowed the use of a new form of banking in which innovative online and mobile payments were used. In the next year, the UK Competition and Markets Authority asked nine big banks to allow licensed third-party direct access to their data.

It helped all payment service providers to operate on a level playing field while also maintaining enhanced security and strong customer protection.

India took a step towards open banking before many developed economies. It emerged with the introduction of the Unified Payment Interface by the Indian Government. Globally open banking made its presence known long ago, but India popped up to the scene only a few years ago.

The open banking standard provides how financial data must be created, shared, and accessed. It facilitated an easy transfer of funds and comparing product offerings to produce a great banking experience that helps the users to meet their needs in a cost-effective manner.

In India, the introduction to open banking was made early; however, its slow implementation and lack of explicit legislature obstructed it from realizing its potential in India.

What is the need for Open banking in India?

The traditional banks have been carrying on their operations on decade-old infrastructures. It has, for a long time, relied on outdated technologies that are prone to risk and threat from cybercriminals. This brings us to the fact that there is a need for innovation and up-gradation from the present infrastructure used by banks.

Open Banking in India: Is the stage set?

Well, the prospect of open banking in India looks very promising. Today it’s a common sight to see people use phones for doing their work, whether it is paying the electricity bill or accessing any services like Amazon etc. However, it is also noteworthy to mention here that cash accounts for 72% of transactions in India, which involves many rural merchants who prefer using cash for transactions.

The Indian Government has continuously pushed for e-banking and minimizes the use of cash for making transactions. Various regulations and policies have been made or relaxed to motivate more and more people to use this form of banking.

Banks and Fintech players have collaborated to provide innovative financial services to their customers. Many banks have accepted the fact that collaboration in banking is the need of the hour in order to remain exclusive and profitable in today’s world.

The risk with Open banking

Open banking Application Programming Interfaces (API) has the element of risk as well, and it cannot be ignored. There is a potential threat of a malicious third-party app that can wipe out a customer’s account. Cybersecurity is still a concern for the country, especially at a time when the case for a cashless economy is being pushed.

The banks and financial institutions have been advised to identify the risks in their existing framework before moving forward. Other relevant factors, such as board oversight, policies, etc. must be utilized in this digital set up. The Reserve Bank also stressed the significance of cybersecurity and the need to have a framework for addressing cyber risks.

Although identity verification and fraud prevention are essential considering bank’s open API initiatives, there are also other risks with data loss, identity theft, money laundering, and terrorist financing activities. With open banking encouraging going fully digital and the fact that their operations will be managed on the web, it increases the chances of fraudulent activities.

In open banking, customer data like transactions and balances held in third-party provider’s infrastructures poses a threat to cybersecurity. Considering all these aspects and the fact that open banking in India cannot be wasted, the Indian government has increased its focus on cybersecurity. It becomes a more critical factor with the rise of connected technologies like UPI.

Will there be increased adoption of open banking?

Physical banking is now being transformed into the era of digital banking. With the benefits and great user experience provided by open banking, the banks may change the way they approach customer service and adapt to the concept of open banking.

Collaborating with third-party service providers is the way forward for banks who can provide them with ways of implementing digital technologies with better customer services, which will not only help them to retain markets but also reduce costs on research and development of offerings.

Open banking in India is set to raise the bar of competition as it will prod large banks to provide improved services to their customers. It will bring about better regulations, technology, and an overall improvement in banking services.

How can Customer Experience be impr...

With the advancement of technology, banks have been vying to provide the best customer experien...