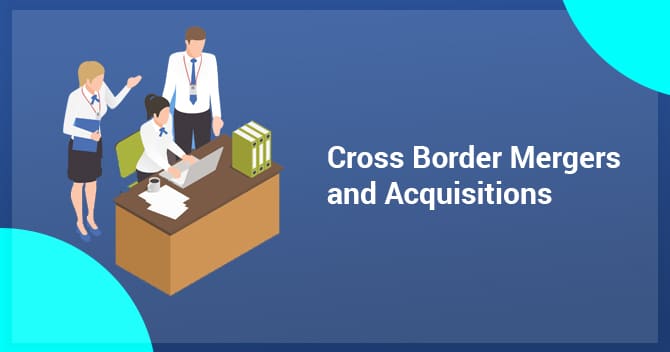 There is a large scale increase in cross border merger and acquisition as an impact of globalization. In 1990’s there were nearly around 200 % jump in the volume of deals in matters relating to cross border merger and acquisitions (M &A) in the Asia-Pacific Region. Cross-border M & A is a combination with other trends such as increased deregulation, privatization, corporate restructuring. Globalisation brought a boost in cross border M &A activity. The cross border M&A’s are taking place in all the sectors such as services, manufacturing, chemical, pharmaceuticals, telecommunications and financial industries. A cross border M & A occurs between two companies existing in different nations by way of purchasing or amalgamating two companies.

What are Merger and Acquisition?

Mergers and Acquisitions are explained as companies’ consolidation. The terms mergers and acquisition are defined below:

A merger combines two companies in one. Such transactions take place between two businesses/ companies of the same size. Additionally, the terms of the merger are amicable and also mutually agreed by the two companies to become equal partners in the new venture.

Acquisition occurs when a company buys another company. Sometimes, the purchase is friendly whereas sometimes it is hostile. Thus, a large company acquires a small company to diversify its business.

What is Cross Border Merger and Acquisition?

In simple words, mergers and acquisitions are defined as a combination of businesses of two or more companies which are incorporated in two or more than two countries. Companies incorporated in different jurisdictions go through this process in order to enhance their growth and increase their standard in the international market.

A local company can be acquired by another company located in other countries. The company can be a private company, public company or a state-owned company. The merger and acquisition by foreign investors also referred to as cross border merger and acquisition, results in the transfer of authority and control in operating the merged or acquired company.

Assets and liabilities of two companies incorporated in two different countries are combined as a new legal entity in terms of the merger.

As per legal terminology:

The state where the origin of the companies that makes an acquisition is also termed as the acquiring company (In other countries, it is referred to as the Home Country).

The country where the company to be acquired or where the target company is situated is referred to as Host country.

What are the Factors to be Considered in Cross Border Mergers and Acquisitions?

Various factors affecting firms for getting in cross border merger and acquisition are as follows:

What is the Procedure for Cross Border Merger and Acquisition in India?

The procedure for cross border merger and acquisition in India are as follows:

Rule 25 A of Companies (Compromises, Arrangements and Amalgamations) Amendment Rules, 2017 also specifies some procedures as follows:

What are the Jurisdictions Specified for Cross Border Merger and Acquisition?

Jurisdictions for the purpose of cross border merger and acquisition are specified in clause (a) of sub-rule (2) of 25A:

As per Section 6 of the Competition Act, 2002 requires the merging companies to meet the threshold limit qualifying under section 5 to give notice to the Competition Commission of India (CCI) within thirty days of approval of the proposed scheme of merger and acquisition by the Board of Directors of the companies involved or execution of any agreement pr document in furtherance of acquisition proceedings.

A waiting period of 210 days from the day of giving notice for the purpose of investigating section 29 and section 30 must be provided to check the existence of any possibility of its adverse effect on the competition.

If the Competition Commission of India (CCI) under Section 31 of the Act, is satisfied regarding the negative affect after the approval of M&A, it shall approve it. Whereas, if it concludes after thorough analysis that the merger is likely to bring an adverse effect in the market, it will disapprove the scheme or send it for modification as to make it fit for the approval.

What are the Effects of Cross Border Merger and Acquisition?

The following are the benefits of cross border merger and acquisition:

Cross border M & A supports an increase in the capital on a long term basis. To expand their businesses, it not only undertakes investment in plants or buildings and equipment’s but also in the incorporeal assets such as technical skills rather than just the capital.

Mergers and acquisition that are undertaken to drive restructuring may lead to downscaling but would lead to employment gains in the long term. This downsize sometimes is essential for the continued existence of operations. In case the businesses expand and become successful, it would create new employment opportunities.

When businesses across countries join together, it brings transfer of technology, sharing of best management skills and practices in the host country. This results in innovations and has a better influence on the operations of the company.

Issues and Challenges on Cross Border Merger and Acquisition

The issues and challenges are discussed below:

The political scenario plays a crucial role in cross border merger and acquisitions. Basically, for industries which are politically sensitive such as defence, security etc.

A cultural challenge can be a considerable threat to cross border M&A. To deal with this challenge, businesses need to spend the right amount of time to get knowledge of the local culture and also of the employees.

The merging companies must look into the various legal and regulatory issues that they are likely to face. While going through the process of reviewing these concerns, it could indicate that the potential merger or acquisition would be incompatible. Hence, it is recommended to not go ahead with the deal.

Tax-related matters are critical, particularly when it comes to structuring the transactions. Many countries are yet to implement International Financial Reporting Standards (IFRS). The parties in the merger should be aware of the financial and accounting terms in the deal.

Due diligence affects the terms and conditions under which the M&A transaction would take place, influence the deal structure affects the price of the deal. There are various other issues as every agreement has its favour and differences.

The corporate sector in India is moving towards the stage where globalisation and its principles are intended to be accepted by the state through favourable legislation but, due to existence of multiple technical legislation governing the concerned subject, it is almost impossible to attain the most desirable stage with one attempt. Though there is very little progress in the research literature to explore the role of culture in the success of these ventures of M&A. Cross-border M&A has added challenges of dealing with both national and organizational culture differences.

General Analysis with relation to G...

Most corporate name changes are the results of merger and acquisitions. But these tends to be u...