Conversion of a company into LLP – Tax implications 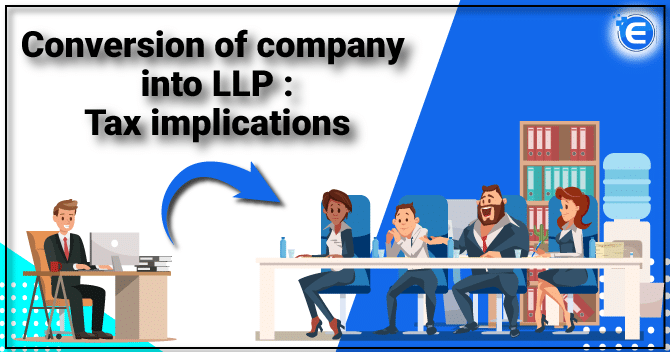 In India, LLP is the most emerging way of doing business. In this mode of business, the liability of the partners is limited. Every partner in the LLP is acting as an agent of the LLP, not of other partners. All the rights of the partners in the LLP to shares all posses and profits are transferable wither in part or in whole.

The LLP Act, 2008 has provided a provision for converting a private company into an LLP. The Income-tax Act 1961[1] has further inserted and amended the provisions relating to the conversion.  Whenever there is a transaction relating to the transfer from one person to another, in that case, the transferor has to pay the capital gain tax.  Section 47(xiiib) has been inserted in the by amending the income tax act.

Transaction of the company into LLP not regarded as a transfer

According to section 47 (xiiib) the following shall not regard as transfer:

Any transfer of the intangible assets or the capital assets by an unlisted company or private company to a Limited Liability Partnership.

Further, any transfer of shares held by the company’s shareholder as a consequence of that conversion of private company into an LLP.

According to the proviso under section 47 (xiiib) the conversion of the private companies into a Limited Liability Partnership is not taxable if it fulfils the below mention conditions:

If the condition above mentioned is violated, the transfer related to the capital assets must be done at the market rate and similarly the capital gain must be calculated.

Transfer of Other Assets:

All the other assets including current assets, stock in trade etc should be transferred at the prevailing market value and the applicable tax to be paid.

The entire shares are in the hand of shareholders of the private company will be converted into LLP’s capital. The shareholders will further surrender the shares and LLP capital is acquired.

Other analysis related to the conversion of the company into LLP

The list of interpretations is vast related to the transfer of the company into a Limited Liability Partnership. Simultaneously, the shareholders who are transferring the shares and the other person who is receiving it are the same. Hence, there will be no payment of the capital gain made to the shareholder because no one can make a profit just by selling to himself.

Reasons when Conversion of company into LLP is restricted

These are the following companies that cannot be converted into LLP

Period of holding assets related to Conversion of Company into LLP

As per Section 2(42A)(b), the reason to determine the period of holding capital assets for determining the nature of the capital gain is the time period for which the total assets was held by the predecessor company shall be included. Hence, the short term and long term will completely dependent on the total holding period of the company from the date of buying.

It is now evident that the LLP Act has provided a provision for converting a private company into an LLP. The Income-tax Act 1961 has further inserted and amended the provisions relating to the conversion.  Whenever there is a transaction relating to the transfer from one person to another, in that case, the transferor has to pay the capital gain tax. All the transactions which are not provided under section (xiiib) are transferred and accordingly the capital gain is paid by the Shareholders of the company as well as the company itself. Further bases on the judicial rulings, and case to case basis, it can be noted that the conversion of private company into LLP is not taxable neither for the shareholders nor the transferor company.

Procedure for Conversion of Partner...

Limited Liability Partnership or LLP has expanded as one of the popular business structures in...

Conversion of Active Company to Dor...

In the Companies Act, 2013 the concept of the Dormant Company[1] was introduced under section 4...

Converting an OPC into a Private Li...