Casting Light on the Role of RBI under FEMA 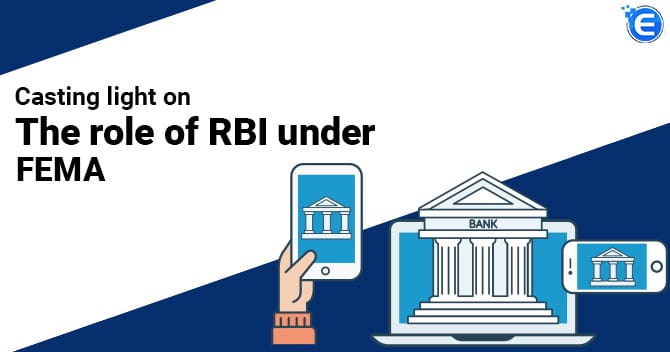 Introduction to the role of RBI under FEMA 1999

RBI, being the central bank in India, enjoys control over currency regulations. RBI also regulates foreign exchange under the Act, where it issues licenses to act as an authorized person. It plays a crucial role in economic development of the foreign exchange market.

FEMA provides the role of controller to the RBI, and RBI supervises and ensures proper flow of foreign exchange. The role of RBI under FEMA can be best understood by the following:

Under FEMA, accounts are classified into Capital and Current Account Transactions. Let us now understand the purpose and the RBI’s role in such accounts.

According to Section 5 of the FEMA 1999, a person can transact in foreign exchange through authorized dealer allowed by RBI if it falls under Current Account transactions. RBI has also executed limitations that should be adhered to in case of certain current account transactions.

Further in schedule, 3 individuals can avail of foreign exchange facility for certain purposes such as gifts, travel to other country, business travels, medical treatment or any other transactions which can be valid in case of current account transactions, but the limit will be 250000 USD. A person can also avail of foreign exchange facility for some other purposes, but RBI approval is mandatory.

Transactions referred to under Section 6(2) entail that the RBI has the authority along with the consultation of Central Government that any class/es can have capital account transactions permissible by RBI. RBI also has the right in case of limitations that can be permitted for transactions. Under Section 6(3), the RBI has provided various directions where they can disallow/regulate/restrict some of the transactions:

FDI is crucial to the growth of the country’s economy. Foreign investments have a great significance in a country such as India. Services, telecommunications, automobiles industry brought in a huge inflow of FDI in India.

There were measures taken by the RBI for foreign investment where two separate routes were notified i.e., automatic route & Government’s approval route.

The control of foreign investment in India is under the RBI where the following are permitted to invest in India:

Role of RBI under FEMA: Compounding of Contraventions

Under FEMA 1999, a provision of compounding of contravention is available. The RBI has the authority under Section13 to compound contraventions except for Section 3 subsection a. Under this section, involves dealing in foreign exchange to a person who is not an authorized person, in this case ED will take action.

Compounding of contraventions can be done in case a person violates the provisions of the FEMA 1999, if the amount is:

The Regional Office of RBI can compound violations of FEMA including delay in filing Form FC-GPR, delay in issuance of shares, pricing regulations violations, shares issued without RBI approval.

For compounding, an application should be submitted with a fee of 5000 rupees in favor of RBI. It is worth mentioning here that with respect to any violation by a person where similar contravention was committed by him & compounded and within 3 years, then it won’t be compounded.

Moreover, when the compounding application is received by the RBI, it shall verify the documents and the application to check if the violation can be compounded or not. Further the authority can ask for record, documents etc which has to be submitted to it within the prescribed time period, failing to do so may result in withdrawal of such application. At the time of passing compounding order, the following factors are considered:

The role of RBI under FEMA is a significant one. RBI has some strict provisions for the regulation of the Foreign Exchange Management Act and it is crucial to ensure that contraventions are reduced and the functioning becomes more orderly.

FDI as debt or preference shares can be raised under ECB norms & External Commercial Borrow...

No Objection Certificate (NOC) For...