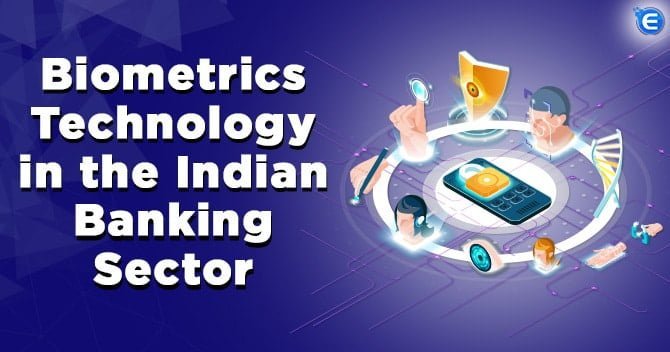 Evolution of biometric technology in the Indian Banking Sector

The use of technology in the Indian banking sector has come a long way. From standing in the long queue at bank branches to transacting at the comfort of their homes, customers have benefitted in the process. This has been made possible with technology.

However, majority of customers were still reluctant to use the internet or mobile banking due to security concerns. They considered it risky, but with the use of biometrics in banking, customers feel more secured that their accounts cannot be illegally accessed by anyone.

Biometrics are considered safer than passwords, and their use is expected to increase in the future. Many people believe fingerprint to be a much safer way than traditional PIN to authenticate card payments etc. Not just in India, but globally the biometric market is expected to take off.

What is the significance of Biometrics technology in the Indian Banking sector?

Today banks around the world are going through rapid digital transformation looking to derive greater benefits. It also includes mitigating cyber risks. Banks deal with enormous amounts of cash and consumer data; therefore, it becomes one of the top targets for hackers.

Banks continuously face a threat from hackers that can cause damage worth millions of dollars, leave alone the reputational damage. This has caused banks to strengthen their security, and it goes without saying that banks and financial institutions must be cyber secure entirely.

Over the years, banks have constantly adopted measures and mechanisms to mitigate cyber risks and frauds. These measures include hardware tokens, software tokens, OTP, biometrics, among others. Banks select multifactor authentication and require users to provide biometric identifiers to mitigate the potential of fraud. Today in the Indian Banking sector, banks use biometrics to its full potential with fingerprints, voice patterns, iris scans, etc. being some of the commonly used biometric parameters.

What are some of the types of Biometric authentication technologies?

Biometrics use various physical or behavioral attributes as it is considered more secure and strong. Different types of biometric authentication have been employed in order to create an infallible system.

Some of the commonly used biometrics technology includes the following:

Iris scan is a method that uses the patterns of a thin circular structure in the eye of an individual. It is one of the reliable methods of biometric identification. Many banks have adopted this form of technology in India, and it is only going north from here.

This is one of the most commonly used biometric technology, and you would have used this in your mobile phones. In this, the patterns on human fingers are analyzed in detail. It is also the most common, as well as the most popular form of identity verification.

It is a complex form of biometric technology but yet is preferred by banks. You would find banks use this technology at ATMs, allowing customers to transact without the use of passwords or cards.

This technology uses the face to validate the access; however, its use is only possible depending on some external factors like lights.

How can biometrics technology be used in banking?

We bring to you ways that banks use biometrics to improve their banking services:

In the banking sector, biometrics is used in branch banking. Banks use fingerprint or vein patterns to authenticate access for banking transactions. It allows banks to identify customers in their branches. In case the biometrics doesn’t match with the system, the access is not permitted.

Biometrics use in ATMs is widespread in many countries. With the use of fingerprint biometric system, ATMs have become much safer to perform banking. The biometric is used to retrieve your account, once matched, which then allows you to transact.

The adoption of biometric in mobile banking has strengthened the case for mobile banking, thereby drawing more customers to it. Passwords are now a thing of the past as they are difficult to remember. It has made banking faster and more secure.

What are the benefits of using biometrics technology in banking?

Biometrics is one of the safest security systems and is increasingly adopted by banks due to its following benefits:

Biometric in banking allows a quick process of logging into accounts. It has made banking simpler and fast.

Due to the cyberattacks, people were reluctant to use online banking, but now with biometrics, customer identities are protected at the time of using online banking.

Banks can track and monitor employee and customer activity in the system to create clear audit trails with the use of biometric technologies.

Earlier telephonic verifications were tedious, and customers required answering a lot of questions to prove their credentials. However, with voice verifications, all these challenges are conquered and consequently has improved customer care services.

Biometrics technology has helped in streamlining the banking operations and has created a safe way of identifying customers. However, with the way technology is advancing, we may witness more evolution in this field, and it is hard to predict where it will end up.

Read our article:The Future of ATMs in the era of Digital Banking

Cryptojacking in the Banking Indust...

In this era of digitalization, where even the smallest of works is carried out digitally, cyber...

Significance of Blockchain in Banki...

The significance of blockchain in banking sectors has been rising like never before. It has the...