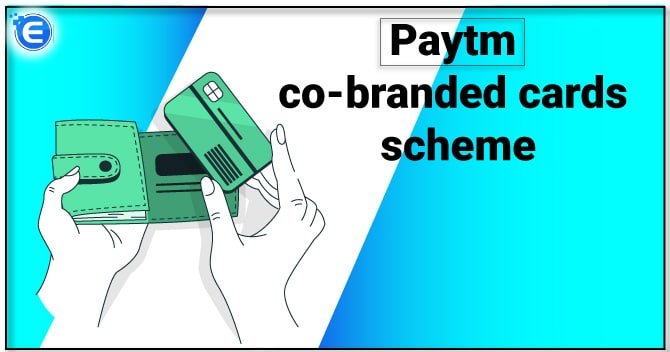 Paytm, an Indian brand and one of the largest digital currency platforms announced that it will be “associating with different card issuers to announce co-branded cards” in the Indian market. Paytm stated that it is keen on transforming the credit card market by allowing ‘new to credit’ handlers to be part of the credit card users’ base. Paytm further stated that its ‘Credit card of net generation is envisioned to “democratise the admission to an official credit scheme for the huge crowds.” Paytm also said that it has plans to issue two million cards in the next 12 to 18 months.

This emerging Indian company also mentioned that its co-branded cards would facilitate “complete control” to the cardholders to control their dealings in real-time. In our great nation India, credit cards are still seen as products for the prosperous sections of the society and not all individuals can avail of its advantages. The CEO, of Paytm lending Bhavesh Gupta, stated at the time of release that , “At Paytm, our focus is to provide credit cards that profit India’s ambitious youth and professionals who are evolved”.

The corporation said that its forthcoming co-branded cards will feature “one-touch services” that would permit users to change address, update security pin number, block the card or request duplicate cards. Paytm emphasized that the users are not obligatory to call customer care support, visit a branch and that it has “digitalised the entire credit card experience” on its application.

The credit card scheme of Paytm will have a convincing & transparent rewards program with assured cash backs on each transaction. This can alter the credit market by delivering ‘new to credit’ users into the Indian formal economy.

The motive behind the Co-branded card scheme

Bhavesh Gupta, who was earlier the CEO of Clix Capital, now at Paytm, added that our focus is to provide credit cards that profit India’s ambitious youth and professionals who are evolved. The move comes at a time when financial establishments have seen an increase in first-time digital users, as the adoption of contactless payment solutions has expanded traction due to the Corona virus pandemic. It is also in tandem with Paytm’s long-term determination to be a full-sized financial services player.

The Alibaba and Softbank backed fintech giant also runs a ‘Post-paid’ service on its application in partnership with non-bank lender Clix Capital, which bids personal loans to a limited set of qualified borrowers.

Under this new scheme, the cards which will be provided by Paytm will offer wide protection by the way of insurance from all the potentially fraudulent transactions to protect its user base, the company said. The facility related to spend analyzer will also be provided with the card whose work will be to accesses the user spending and help the user to make better financial decisions.

The company comes with a promise of the Next Generation Credit Cards with various immediate one-touch services such as altering of the updating the address, security pin number, blocking the card in case of fraud or loss prevention, delivery of a duplicate card, and presentation of exceptional credit-limit.

Furthermore, the users will also have the authority to switch off the card for international transactions or contactless payments when not necessary to avert fraudulent transactions.

Adding on the new credit card will provide protection of insurance against fraudulent transactions to defend user’s money.

Paytm Partnered with Citi in 2019 for Paytm First Card

Paytm further mentioned that the app will empower users to pick a “suitable time” for the gathering of documents with the platform than providing users to check development on card delivery and issuance.

The unified application process will diminish the rate of application refusals and will allow more people to contribute to the official credit system, stated by Paytm in their release. The credit card scheme of Paytm will have a convincing & transparent rewards program with assured cash backs on each transaction.”

The company highlighted that the reward points on its forthcoming credit cards will have no expiry and that operators will be able to utilize those points for “many different payments” within the eco system of Paytm.

It has been highlighted that Paytm in 2019 had launched its co-branded credit card with Citi bank[1]. The first cards of Paytm bids a number of benefits to users such as one percent cash back on yearly fee waiver and transactions, if transactions of users exceed Rs 50,000 per year.

It is clear from the above discussion it is clear that the main aim of Paytm to tap the benefit of the emerging credit market of India. It is evident that Paytm is keen on transforming the credit card market by allowing ‘new to credit’ handlers to be part of the credit card users’ base. The company further stated that its ‘Credit card of net generation is envisioned to “democratize the admission to an official credit scheme for the huge crowds.” Paytm also said that it has plans to issue two million cards in the next 12 to 18 months. Overall, the new players are keen to take advantage of the credit card market presence in India.

Read our article:How You can Also Make Your Wallet Like Paytm?

Cryptojacking in the Banking Indust...

In this era of digitalization, where even the smallest of works is carried out digitally, cyber...