Assessment of NPA in Bank Audit 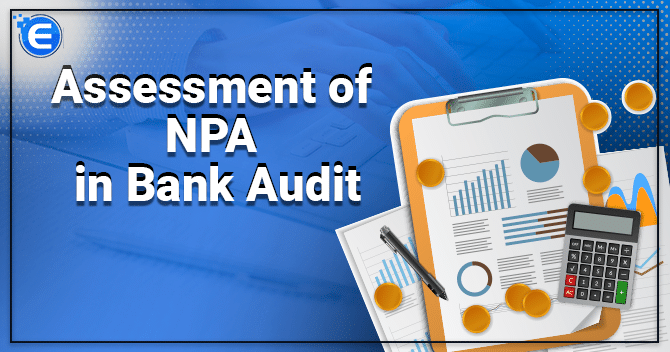 It was once stated by the top RBI official that the modern method of System driven identification of bad loans has not proved to be robust as much as necessary in various banks. This apprehension of RBI itself obliges supplementary accountability on all the Statutory Auditors of Bank. This article describes the Assessment of NPA in Bank Audit.

Statutory Auditors cannot just depend on the accounts recognized by the system. The auditor required to move extra distance just to recognize the hidden non-performing assets (NPA) accounts in the bank audit. Before understanding this concept first, let’s understand what is a non performing asset?

What is an NPA?

A non-performing asset (NPA) refers to the categorization of advances and loans that are in arrears or in default. A loan is also referred to as arrears where the interest payments or principal are missed or late. A loan is said to be in a default when the lender believes the loan agreement to be broken and the debtor is unable to meet his obligations.

The classification of the assets is generally guided by the master circular of the Reserve Bank of India[1] dated 1st July 2015 which pact with the ‘, Asset Classification, Prudential norms on Income Recognition, and the Provisioning pertaining to Advances.’

Accordingly, an NPA is an advance or a loan where:

Activities for recognizing the bank’s NPA

The following activities are considered to dig out bank NPAs:

The foremost thing an auditor must perform is to go from beginning to end of the Internal Audit reports. These reports will give an actual forthcoming of the functioning of the Branch. This will also give a light idea of those loan accounts which are frequently irregular, chronic, overdrawn and where terms and condition of authorization are not complied with. From the list of these financial records and an exercise can be made to determine new Non performing Assets accounts.

Screening of accounts to recognize NPA

The accounts screening can provide a fair idea of correct categorization of the advances of a Branch. The Interest’s payment by the end of each month may avoid a cash credit description from being confidential as an NPA account, but if the credits in the account are not proportionate with the limits authorized, then this may point toward diversion of funds, closure of business or a substantial fall in the business activity of the entity of the borrower.

The recognition of Non Performing Assets by the internal system itself exclusively depends on the consideration set in the system. In a matter of agricultural advances the account is usually classified as Non Performing assets if the installment of interest or principal thereon stays unpaid for two crop seasons for the short duration crops and another season for long duration crops. However, sanctioning of the housing loans for individuals in the rural sector cannot be termed as agriculture loans.

However, while opening the accounts related to loans in the computer system, if coding of such housing loans is incorrectly done as the agriculture loan then the system can never recognize such loans as NPAs.

Restructuring of accounts leads to NPA

The accounts restructuring system without obtaining submission from the borrower company and also without performing additional loan documents and determining the future feasibility of the business may lead to categorization of these accounts as Non Performing Assets. Accounts where reformation is regularly done are also obligatory to be classified as NPAs.

The projects which are financed by banks, the ‘Date of Commencement’ or the ‘Date of Completion’ and of Commercial Operations’ (DCCO), of the venture is clearly spelled out at the moment of financial closure of the project and the same is officially recognized. This is also documented in the evaluation note by the bank during the permit of the loan.

The auditors shall scrutinize the DCCO in respect of term loan accounts. Non attainment of DCCO may lead to categorization of the account as NPA.

In case of amounts of cash credit, it is predetermined to submit a book and stock debts statement quarterly/ monthly. These statements are obligatory to determine the accessibility of primary security at all times. The drawing power is drawn based on the accessibility of these securities.

A working capital borrowable account will become nonperforming assets if such uneven drawings are allowed in the account for a nonstop period of 90 days even though the unit must be working or the financial position of the borrower is satisfactory.

Debit & Credit entries of the same value amounts to NPA

In the case of Overdraft accounts/ Cash Credit, if the account stays out of order it is to be classified as Non-performing assets. As per the guidelines of RBI, the account should be dealt with as “out of order” if the outstanding balance remains continuously in surplus of drawing power / sanctioned limit for 90 days. In the matter where the outstanding balance in the principal operating account is not more than the drawing power / sanctioned, but there are no credits constantly for 90 days as on the balance sheet’s date or credits are inadequate to cover the interest withdrawal during the same period, these accounts should be dealt as Non performing assets.

The trend of recovery in education loans is not very hopeful. There is a sharp rise in NPA accounts in this section. There is a common practice of reforming these accounts to save their slippage to the NPA category, usually after the restructuring is done without determining the employment specifics of the borrower. Any reformation done without suitable justification and without certification should not stop the auditor from classifying these accounts as non performing assets.

Similarly, in the case of accounts of home loans, which are over 10 years old and where there is outstanding principal is still over 50% of the total loan amount authorized, such accounts must be screened carefully.

It is clear from the above discussion that it is a hard task for the modern method of System driven identification of bad loans that have not proved to be robust as much as necessary in certain banks. Statutory Auditors cannot just depend on the accounts recognized by the system. The auditor required to move extra distance just to recognize the hidden non-performing assets (NPA) accounts in the bank audit. All these above mentioned activities are used for successfully identifying banks NPAs.

Analyzing the Prospect of UX in Ban...

As technology advances to the next level, the banks need to strategize on creating the best Use...

Rise of Core Banking in India

The introduction of technology into the banking system has caused a massive transformation in t...

MSME sectors have played a crucial role in the overall economic development in India. It has re...