Why an NRI cannot invest through an NRO Account? 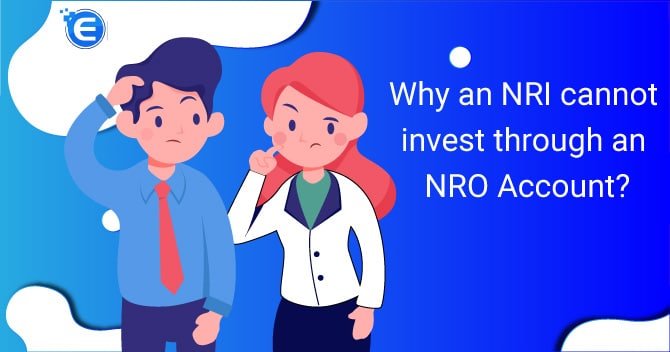 An NRI is referred to as a Non-Resident Indian who has stayed outside India for a specific period. The Government of India and the Reserve Bank of India amended the definition of an NRI from time to time. Previously, when an individual stayed outside India for more than 182 days, then the individual would be considered as an NRI for tax treatment. There are different forms of accounts that an NRI can own in India. One such account is the NRO Account.

Different types of Bank Accounts Held by an NRI: NRO, NRE and FCNR

An NRI or PIO can hold different forms of bank accounts for managing money in India. Managing money would hard for an NRI if there are a different form of exchanges under the same bank account. For example, managing Indian rupees, as well as USD through the same account, would be a challenging task.  An individual would have to earn outside India in the form of salary which is credited from a foreign company to be considered as a NRI.  Under no circumstance is an NRI allowed to maintain an Indian account. If an NRI maintains an Indian Bank account, then the penalty would be present under the respective authority.

Hence the Reserve Bank of India (RBI) under FEMA regulations has classified accounts into the following:

The following are the features of an NRO Account:

An NRE account is an abbreviation for Non-Resident (External) Rupee Account. This form of account can be opened in any form which is similar when compared to the NRO account. NRI and PIO are allowed to open these types of accounts with specific authorised banks which are under the Reserve Bank of India.

The main features of the NRE account are as follows:

An FCNR account is an abbreviation for the Foreign Currency (Non-Resident) Account. This account is another form of bank account allowed to be opened by the RBI. NRI and PIO’s are allowed to open this form of account. Unlike NRO accounts and NRE accounts, the FCNR has only one format of being open. This would be in the form of a fixed deposit account with the authorised dealer.

The following are the features of an FCNR Account:

SNRR is an abbreviation for Special Non-Resident Rupee Account. This form of account can be opened by NRI and PIOs who have some form of interest in India. The RBI has a set of specific guidelines for running the SNRR account.

The following are the features of the SNRR account:

Which form of account is best suited for the needs of an NRI?

Usually, the NRI will choose an account depending on the circumstances. If an NRI does not have any form of Indian payments such as dividends from Indian companies, any form of rent from any particular commercial or residential property, or any other form of pension payment from Indian authorities, then choosing an NRE account would be suitable. There are different benefits to choosing an NRE account. First and foremost foreign currency deposited in this account will be converted into a specific form of Indian currency. This is not possible in an NRO account.

Hence if an NRI does not have many investments in India, then choosing to open a basic NRE account with an authorised bank would be suitable. However, say the NRI wants to have a joint account with a resident Indian, then choosing the NRO account would be suitable. Different form of investments can be easily and locally managed through the NRO account. However, the only disadvantage is the requirement to pay the amount of tax (tax deducted at source) on the interest earned and the principal amount.

So from the above, the different types of accounts which can be opened by an NRI are explained and analyzed. However, there is no clarity whether the investment by an NRI through the NRO account is limited or restricted. Taking the above analysis, we will come to a conclusion on the same.

The following analysis is required to understand this prospect:

The RBI has brought out different forms of accounts which can be opened by an NRI. An NRI can open an NRO or NRE account. Based on the requirement of the NRI, the account has to be opened. If the NRI wants to manage domestic investments such as Indian investments then going ahead with opening the NRO account would be beneficial. However, if the NRI wants to convert foreign funds to Indian funds, then choosing the NRE account would be suitable. In terms of the amount which has to be repatriated and managed, it is clear that specific amount is only allowed to be repatriated from the NRO account. Transferring a specific amount is possible but carrying out any investment is not possible.

Regulatory framework of issue of se...