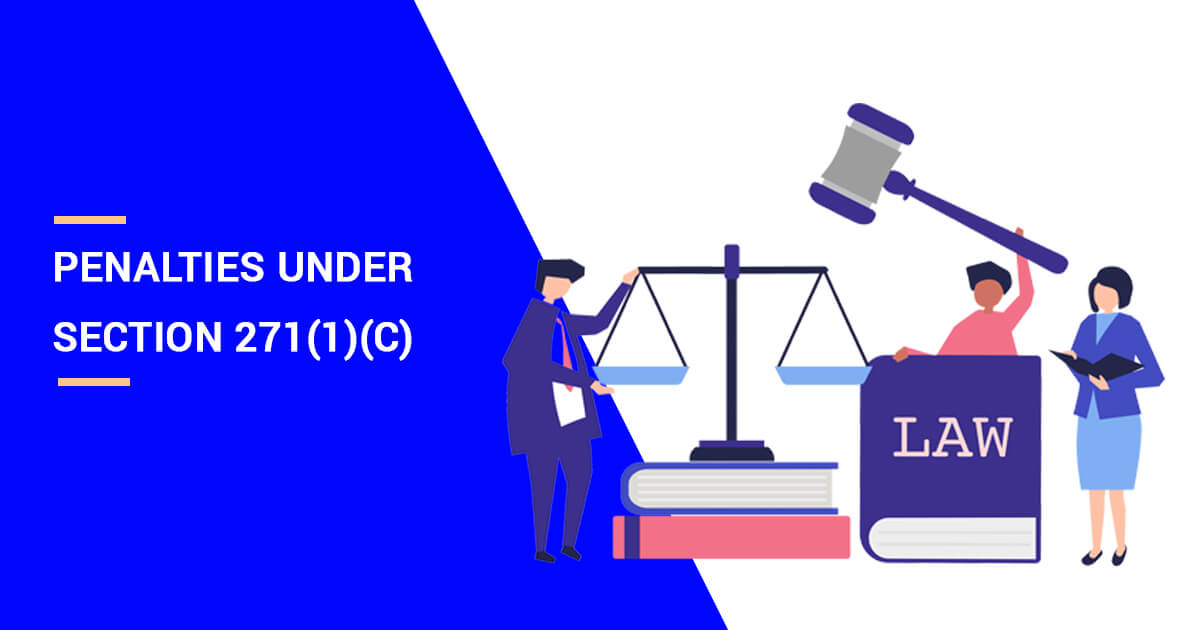 Income Tax Act, 1961 contains various provisions relating to penalties, fines & interest besides taxation of a taxpayer. Thus, for penalizing the defaulting taxpayer for the distinct nature of defaults such as late payment of tax, late filing of the return, failure in making a tax payment, failure to maintain records, etc., the Income Tax Act[1] has introduced various sections that impose different penalties for different defaults.

Penalties and fines are imposed on those who don’t comply with the guidelines and provisions of the Income Tax Act and in some severe cases, prosecution proceedings are also conducted against those who have either concealed or furnished wrong income.

Section 271(1)(C) deals with prosecution & proceedings for the concealment of income, which is discussed in detail henceforth.

Section 271(1)(C) authorizes the Income Tax Authorities to impose a penalty or even initiate proceedings against any assessee who has either “Concealed” or “Furnished Wrong Income.” If an Assessing Officer or Commissioner of Income Tax is satisfied with the occurrence of such defraud, he can initiate proceedings against the assessee.  In simple terms, this section will be applicable if tax authority is satisfied with the following two assumptions:

Following penalty is imposed for the concealment of income or non-disclosure of income details:

The intention of the provision of this section is absolute transparency while paying tax. It prohibits an assessee from evading payment of tax by hiding facts about his income or misrepresenting the income.

Concealment is an intention to hide and not disclosing the correct information about the income with an intention to evade tax payment and eventually pay a lesser amount of tax.

Furnishing Wrong Income takes place when particulars of full information are disclosed, but they are inappropriate, false, or misleading — for instance, portraying a lesser taxable amount.

In the case of Trisha Krishnan, it was held that the burden of proof lies with the assessee during the concealment proceedings to submit the necessary supporting documents & information for the disclosed income and the burden of proof shift to Income Tax Officers (ITO) if the tax authority raises any doubt that the taxpayer has concealed his income.

For initiating any concealment or penalty proceedings against the assessee, the income tax authority is required to prove the concealment of income by the assessee. Such proceedings can be initiated only when the same is communicated to the assessee in written through assessment order.  The assessing officer must mention the following in the order:

As in the popular case of Shyamlal Boran Mandal, the assessing officer was not able to justify his charges against assesses as there was concealment of Income or non-disclosure of Income. So, the case was dismissed by the court on the grounds of deficient show-cause notice.

Various cases of the High Court & Supreme Court have made various judgments on the applicability of the provision of this section. Section applies when:

Following are the general key-points for an in-depth understanding of the provisions of this section:

Case 1: If an assessee himself surrenders his extra income, then there is no imposition of concealment case. In the case of Jayaraj Talkies, the assessee surrendered a certain amount of extra income for which he did not have any supporting documents or vouchers. The court did not impose any case of concealment on him.

Case 2:  Supreme Court in Reliance Petroproducts case held that claiming anything that is not sustainable in law doesn’t furnish inaccurate claims or furnishing incorrect details about the taxable income of the assessee. The assessing officer can levy penalty up to that part of the income where the assessee is unable to provide clear details of the total income.

Case 3: Penalty proceedings are different for different cases. Penalty proceedings are different from normal concealment or giving inaccurate details. Madras high court in the case of N. Ranjit held that the application of penal provisions is not automatic and the levy of penalty depends upon the facts of each case. As per the section, the penalty can be imposed up to three times for every concealment or incorrect information.

Collection of tax on sale of goods...

The Finance Act recently inserted sub-section (1H) in section 206 C. As per this provision, sel...

As all are aware that the Income Tax Department is the governing body that regulates the income...