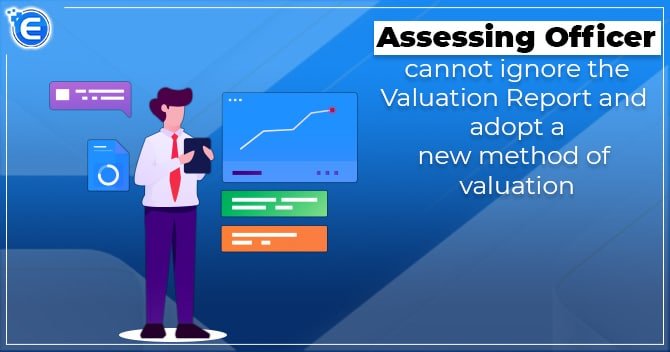 In the case of M/s. Innoviti Payment Solutions Private Ltd. Versus ITO (ITAT Bangalore), the assessee filed an appeal against the order of the Assessing Officer on the valuation of shares. In the said order, the valuation report furnished by the assessee was not considered and the AO moved forward by making fresh additions in valuation and that too, based on a new method of valuation.

The Assessing Officer noted during the assessment procedures that the assessee’s corporation received Rs. 2,45,02,463 as securities premium on the issuing of shares. The AO also observed that such shares were issued on a premium of Rs. 23.50 per share and that the nominal value of the shares was Rs. 10 per share. He stated that 10,42,658 of such shares were issued to 11 individuals for a total price of Rs. 349,29,043. The Assessing Officer believed that the company’s shares had been overvalued and, as a result, requested that the assessee justify the valuation.

The Assessing Officer acknowledged that the provisions of section 56 (2) (vii-b) will apply, which states that if shares are issued at a price greater than the fair market value, the money collected in excess of the fair market value of shares will be taxed as income from other sources in the hands of the company. The assessee was asked by the AO to prove the amount of share premium received. And the assessee responded by submitting a certificate obtained from a Chartered Accountant and said that this was the basis for valuing the shares. The AO also believed that the management’s projections and estimates were unrealistic and did not have any basis, rendering them purely arbitrary in nature.

The valuation made by the assessee was found to be in accordance with DCF. The AO, on the other hand, decided that the assessee’s valuation could not be accepted without first checking the veracity of the data submitted by the assessee.

As a result, the Assessing Officer rejected the assessee’s valuation and applied the NAV approach prescribed under rule 11UA of the I.T. Rules, resulting in an increase of Rs. 1,12,21,109. The Assessing Officer hence determined the value of the shares and found out that an amount of Rs. 112,21,109 was received from the resident shareholders in excess of the fair market value of shares as calculated by the AO and hence, this amount was added. According to him, excess share premium was collected by the assessee. The assessee first filed an appeal with the CIT(A) and then with the ITAT after being aggrieved by the same.

The decision of ITAT: Can AO change the method of valuation?

The facts & data available on the date of valuation must be examined while analyzing the valuation report, and the actual outcome of the future cannot be used to determine the trustworthiness of the projections.

The Tribunal also stated that the assessee bears the major burden of proving the accuracy of the valuation report because he has specific knowledge and access to the facts of the organization, and he is the only one who has selected this technique. As a result, he must satisfy himself as to the accuracy of the projections, discounting factor, and terminal value, among other things, using empirical data or industry norms, as applicable, and/or scientific data, scientific method, scientific study, and applicable guidelines for the DCF method of valuation. With all these observations by the ITAT, the matter was restored by the Tribunal back to the Assessing Officer for a fresh valuation and a fresh decision.

Hence, the ITAT[1] decided that to conform the assessee, the Assessing Officer can examine the valuation report and decide a new valuation either by himself or by enlisting the help of an independent valuer, but the basis must be the DCF technique.

As a result of this case law, it was decided that the AO should review the valuation report prepared by using the DCF method and, if necessary, conduct a fresh valuation either by himself or by summoning a final determination from an independent valuer to address the assessee’s issue. But the Assessing Officer cannot change the method of valuation and he has to adopt the DCF technique only.

Read our article:Additions under Section 68 can’t be made based on mere suspicion

Tax implication on the small busine...

Income tax laws are professed to have a complex structure in India as there are number of claim...

To enable the electronic conduct of income tax assessment proceedings, a faceless scheme of scr...